Books
Bury Me in Shadows 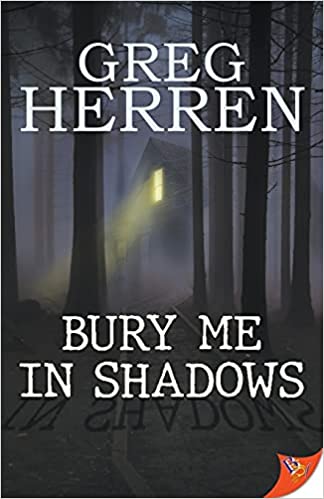 Greg Herren's Bury Me in Shadows finds 19-year-old Tulane University student Jake Chapman exiled to Corinth County, Alabama, after a messy breakup with a boyfriend results in a four-day bender capped by a hospital stay. Jake can’t go home to Chicago, as his mother is traveling for work, so rather than attending rehab, he’s spending the summer with his maternal grandmother, Sarah Donelson, who recently suffered a stroke. His mother will pay him to clean out the attic, spell his grandmother’s nurses, and watch Kelly Donovan—a distant cousin about whom nobody knew until he moved in with Miss Sarah last year.

Jake is also to monitor the archaeologists excavating the family’s former plantation house, which burned during the Civil War; Uncle Dewey approved the dig after Miss Sarah fell ill, and she’d be livid if she found out.

At first, Alabama proves surprisingly agreeable thanks to handsome archaeology intern Beau Hackworth, but it’s not long before things go south. Affable Kelly undergoes a personality change, Jake is plagued by nightmarish memories that aren’t his, and a skeleton is unearthed near the antebellum manor—one much newer than the ruins, themselves.

History looms over Herren’s superior Southern gothic thriller, which sensitively explores the region’s legacy of racism and homophobia. Jake’s wonderfully vulnerable narration is full of foreboding, the supernatural elements are expertly incorporated, and a flurry of stunning reveals catapults the thoughtful, multilayered plot to a devastating yet hopeful conclusion.