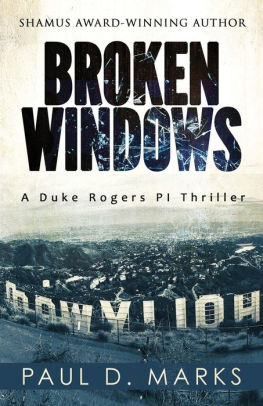 Paul D. Marks’ Broken Windows is extraordinary. The book opens when Susan Karubian, an unsuccessful Hollywood starlet, jumps to her death off the famous Hollywood sign. This immediately gives this marvelous novel its noirish truth: Tinsel Town will kill you. It’s 1994, and California is set to pass the anti-immigrant Proposition 187, and as a result, half the state’s domestic workers and handymen see deportation looming on the horizon. Against this backdrop, Marisol, an undocumented maid, emerges from the shadows and asks PI Duke Rogers to find her brother’s murderer. After only a brief investigation, the police had put young Carlos’ death down to an accident, but Marisol doesn’t trust the police. Duke, being good-hearted to a fault, takes the case only to find himself caught up in a conspiracy that reaches to the highest levels of state—and possibly national—government. In the meantime, in what first appears to be a mere side, plot, disbarred attorney Eric Davies, jobless and short of meeting the rent on his slum-side apartment, puts an ad in the paper: $$$ Will do anything for money $$$. The ad works, but Eric soon wishes it hadn’t, and Eric and Duke meet under less than auspicious circumstances. While the plot is both fascinating and timely, the real beauty of Broken Windows lies in Paul D. Marks’ gorgeous authorial voice. Like many Angelenos, Marks has a love-hate relationship with his hometown, lending him the ability to write bleak apres-earthquake passages: “I was lucky, the only thing that broke in my house was a prop vase from The Big Sleep. But right next door the chimney had come down in their driveway. I guess I was on the good side of the quake ripple.” The cynical Duke has seen it all and heard it all, but by the finish of Broken Windows, even he is horrified by the carnage created by Tinsel Town’s denizens in their pursuit of fame and fortune. These human carnivores almost make us suspect that Susan Karubian might have had the right idea after all.