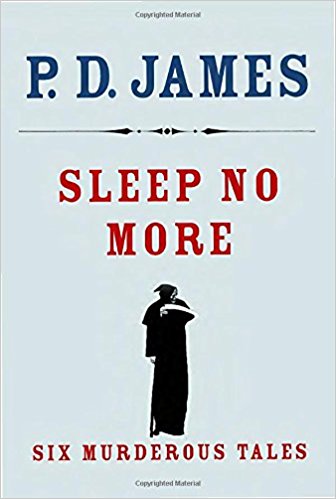 Sleep No More: Six Murderous Tales, features a half-dozen previously uncollected and very unordinary short stories by the late P. D. James. The tales are less whodunit and more whydunit; each story is about the killer’s motive and escape from justice, rather than the identification of the culprit.

The only traditional whodunit is the masterful, multi-viewpoint novelette “The Murder of Santa Claus.” Its commonplace traditional mystery setting, a genteel country house at Christmas, creates an expectation for the reader that James happily and expertly shatters. When an awkward teenager and future detective story scribe—“I do a workmanlike job on the old conventions, for those who like their murders cosy”—is invited to his wealthy uncle’s home for Christmas, he finds himself as the last person to see his uncle alive. The story’s wry sense of organic justice and a beautifully turned climactic twist remove it from the ordinary to the extraordinary.

“The Yo Yo” is a brilliant rendering of a father’s love, and the murder demanded by that love. A crime both reader and narrator can easily rationalize. “The Victim,” which is my favorite story in the collection, is a straightforward revenge tale that details a murder; both its planning and its execution. It is James’ take on the anti-hero, and its harsh sense of morality made this reader think the wrong person was murdered. “The Girl Who Loved Graveyards” is the most original and atmospheric story in the collection. A young girl, sent to live with an uncle and aunt in East London after her father and grandmother die from influenza, has a tenuous grasp on her past. Her determination to find and visit her father’s gravesite leads both girl and reader on a macabre and surprising journey.

Sleep No More is a brilliant collection of stories that reveal James’ true artistry as a writer of traditional mystery fiction. The tales wander from, and play with, traditional genre tropes in surprising and satisfying ways. And each features James’ usual smooth prose, wry humor, and her ability to please even the most demanding reader.