Short Stories
Down & Out: The Magazine 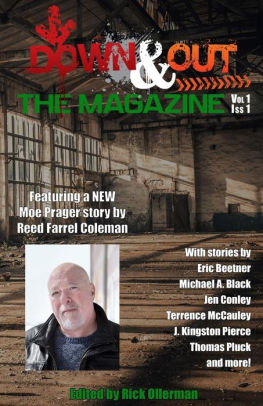 The first issue of Down & Out: The Magazine is as promising as it is exciting. It’s a new digest-sized crime-fiction magazine with original stories from contemporary writers and, with its A Few Cents a Word segment, classic tales published after Dashiell Hammett and Raymond Chandler moved from the pulps to novels and screenplays. This first issue’s classic is Frederick Nebel’s novelette “Rough Justice,” which appeared in the same 1930 issue of Black Mask Magazine as did Dashiell Hammett’s last Continental Op story. It’s an engaging hardboiled tale featuring “Tough Dick” Donahue trailing a suspect into an urban darkness where he finds the kind of trouble—murder and betrayal—that makes for great late-night reading.

The original stories tend to the hardboiled and most feature a series character. Reed Farrel Coleman’s “Breakage,” which brings Moe Prager back to the page in a vintage 1984 Brooklyn setting, is a missing-persons job. As a favor for his longtime friend Israel Roth, Moe agrees to find a survivor of Auschwitz. A nasty climactic twist makes for a satisfying tale. “Hit Me” by Rick Ollerman, who is also the editor of the magazine, is an ironic tale of matrimonial bliss and just desserts. The issue includes five additional stories, without a dud anywhere, from crime-writing stalwarts Eric Beetner, Terrence McCauley, Jen Conley, Michael A. Black, and Thomas Pluck.