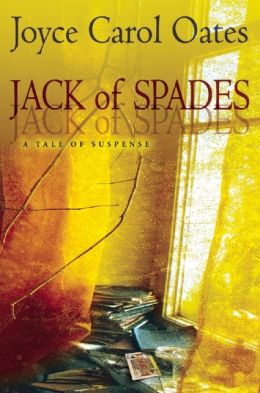 Stephen King? You’re soaking in it.

Everything in Joyce Carol Oates’ latest slice of bleak, from the tone to the plot itself, seems to deliberately conjure up thoughts of the Big Man from Bangor. Even the protagonist, much loved and respected bestselling mystery author Andrew J. Rush, is acclaimed as “the gentleman’s Stephen King.” His long-running series of novels have been translated into more languages than he can count, and have sold in the zillions, earning him wealth, prestige, and a huge house in his small hometown, where he still lives with his wife of many years. Sound familiar? It should.

But of course, this quick, pulpy read wouldn’t be true to the spirit of King (or Oates, for that matter) if nice guy Andrew didn’t have some kind of secret. Turns out the hometown hero has a pen name—Jack of Spades—under which he writes bloody, bleak, mean-spirited thrillers. Real nasty stuff. The books don’t sell as well as those written under Andrew’s own name, but they’re slowly gaining in popularity, even as they become more vile and venomous. More alarming, though, is that (shades of King’s The Dark Half) Jack seems to be slowly taking over Andrew’s mind. And that his pseudonymous alter ego is possibly even more violent, hateful, and unhinged than his books.

Meanwhile, back in the “real” world, Andrew has been summoned to court to answer charges from a local woman (no model of sanity herself), who has accused him of plagiarism, while his adult daughter has discovered some disturbing similarities between the Jack of Spades books and the Rush family history.

The literary writer (Oates has won the National Book Award and been nominated several times for the Pulitzer) appears to be having a ball, gleefully picking at King and his oeuvre like a scab. But she never stoops to picking on him. The stylistic differences between herself and King, however, are notable. Her economy of words, her scalpel-like precision, her decision to almost always zig where King would zag, offer illuminating insights on both storytelling and voice, and how a storyteller’s voice and style alone can make a difference. Not better or worse, but different.

It’s like having one of your favorite songs covered by another artist. You’re not sure if you like the new version better, but damn if you don’t turn the volume up when either one comes on.