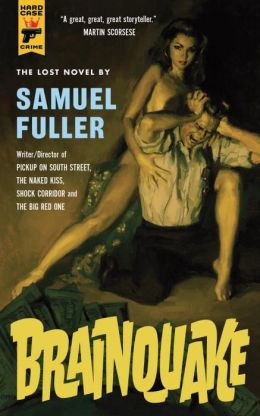 The late Samuel Fuller, journalist, war hero, and the acclaimed filmmaker who gave us Pickup on Noon Street, Shock Corridor, The Big Red One, et al., was not a subtle director. Hell, he was about as pugnacious and in-your-face as a director could be, with his stark, confrontational camera shots, and often bruising subject matter.

So it should come as no surprise that he wasn’t a subtle novelist, either: this book opens with a baby shooting his father in the face. Brainquake, written in the early ’90s during the last years of the author’s life while in he was in self-imposed exile in France, is finally published in English, and shows no lack of two-fisted fire.

Paul Page is the quiet man who suffers from what he calls “brainquakes,” debilitating blackouts that he has no control over. A loner by choice, circumstance, and temperament, he lives in a dumpy little waterfront shack “down in the Battery” on the edge of Manhattan, and only ventures out to work his job as a trusted bagman for the mob. Possessed of a bland, emotionless mug that gives nothing away, it’s hard to pin him down, but his simple life seems to suit him. He does his job. He writes poetry.

And then the poor sap falls in love...with a young mother whom he spies on regularly as she walks her baby in the park. But all is not as it seems. The young mother is a moll, with a quick eye for the main chance, and when the father of her baby is murdered in a spectacularly convoluted fashion, Paul and she are thrown together. At first she’s not interested, but then...

This isn’t so much a finely etched noir as it is pure, unadulterated pulp, full of a raw, rough energy. Fuller writes like he directs, with thick, almost cartoonish strokes, peopling this potboiler with broad-shouldered cops, killer priests, battered French Resistance fighters, damaged children, treacherous femme fatales, lovers on the run, and a bag of stolen money. Plus, of course, plenty of violence, both in New York and Paris, where everyone ends up. And caught up in the middle of it all is Paul, a dead-faced patsy whose wobbly mental health seems to be slipping away.