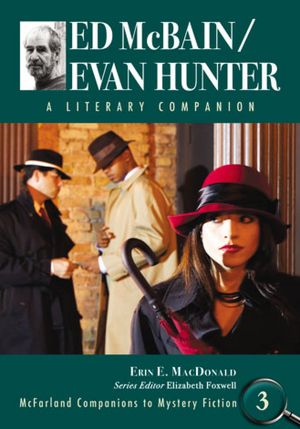 Like earlier volumes in this series on John Buchan and E.X. Ferrars, this is a superb reference book, solidly written and painstakingly accurate. It covers all of its prolific subject’s output, short and long, fiction and nonfiction, under various bylines (Richard Marsten, Curt Cannon, and others apart from the two famous ones), most but not all in the crime/mystery genre. Alphabetical entries include novels (with plot synopses, critical comments, thematic identifications), short-story collections (plus a separate article on uncollected stories), film and theatrical scripts, characters (series and one-shot), locales (including New York and the 87th Precinct’s fictional equivalent Isola), associates (Alfred Hitchcock, Craig Rice), and topical essays (Italians, police procedural, pseudonyms, realism, war). Some of the material may be new even to avid fans, such as the extended discussion of the sleaze-paperback byline Dean Hudson, which, though he denied it, is believed to have been used by Hunter. Features include chronological and alphabetical checklists, a brief biography and career chronology, a map of the 87th Precinct and a floor plan of its detective squad room, a list of Hunter/McBain’s playful references to his own work (mostly to the Hitchcock film The Birds), an eight-page annotated primary and secondary bibliography, and a substantial index.

Surprisingly, the meticulous author has missed at least one item, the novella “The Death-Ray Gun” (Manhunt, January 1955).