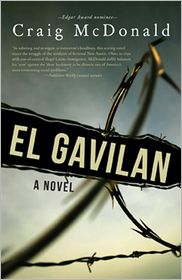 An ex-Border Patrol officer, Tell Lyon, relocates from the Southwest to New Austin, Ohio, when he becomes the head of police there. His new job is not that different from his old profession despite the change in weather—illegal Mexican immigrants have flooded into the area looking to start new lives; and because of that, there is plenty of tension with the locals. County Sheriff Able Hawk has started an aggressive campaign to stop the influx of illegals into the area, as have the sheriffs from the surrounding counties. The authoritarian Hawk needs Lyon to help him clean up the area, especially since Lyon has extensive experience working along the US-Mexico border. The small community is rocked when the body of a Mexican American woman close to Hawk, Thalia, is found brutally raped and murdered in a field. Lyon discovers that Thalia is only the latest of several murdered women found in the area. Suspicions mount against a number of prominent local citizens as Lyon and Hawk track their quarry.

Craig McDonald's latest is an unflinching look at the difficult issues surrounding Mexican immigration in America. The book could have come off as an irritating polemic, but McDonald avoids this by grounding his controversial subject within a thoroughly gripping crime story, and peopling it with characters that are consistently realistic. Lyon, still haunted by the tragic deaths of his wife and children while working the border, knows all too well the harsh reality of illegal immigration and he could have been written as nothing more than a revenge-minded lead. But Lyon is thankfully anything but a clichéd cop. Still wounded emotionally when he arrives in New Austin, Lyon's ability to hold on to his humanity as he moves from one tragedy into the next makes for a refreshing and fascinating character. Even more impressive is the portrayal of the imposing Hawk. Set up as a frighteningly rigid cop (who initially appears motivated by racism in his zeal to rid his county of illegal immigrants), McDonald humanizes Hawk in some surprising and effective ways, showing how even the most problematic character can be presented with depth and display degrees of unforeseen sympathy. El Gavilan is a dark and difficult journey at times, but it never loses sight of its characters' complexities.

A crime novel that takes an unflinching look at the issues surrounding Mexican immigration in the US.