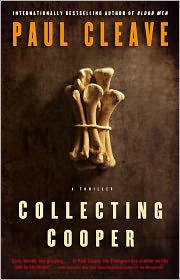 Let’s face it—there’s something creepy about our collective serial killer fetish. Maybe even more disturbing if you’re a bookseller, watching customers stocking up daily on Manson, Bundy, et al. And don’t even get me started on those novels full of lovingly detailed gore and mutilation narrated in the first person. New Zealand thriller writer Paul Cleave’s dark and bloody Collecting Cooper kicks off with, yes, yet another abduction of yet another pretty young woman, and relates the horrendous details of her prolonged captivity as the forces of good race to save her. But Cleave is actually doing more than writing porn for sickos—he’s also poking a stick into some very dark places, which is what makes his tale alternately enthralling and unsettling.

It’s not enough that Christchurch, New Zealand, is crawling with psychos—no, everyone in the story is seemingly obsessed in one way or another with homicidal maniacs, in particular nominal hero Theodore Tate, the disgraced, guilt-ridden private eye just out of prison after four months for driving under the influence. He’s hired by Donovan Green, a figure from his troubled past, to find his daughter, Emma. Meanwhile, Schroeder, one of Tate’s few remaining police friends, asks him to look into the whereabouts of another serial killer, Melissa X. And then Emma’s psychology professor, Cooper, who’s writing a book on serial killers, is kidnapped by a former mental patient who is also, yes, obsessed with serial killers.

The circle of obsession—and the impulse to torture and kill—spreads through this book like a virus, as though contact with monsters alone can turn you into a monster. Cleave juggles multiple points of view and some deft misdirection to keep readers off-balance. His hellish depiction of Christchurch in the middle of a heat wave is without pity, and, as a reward to the faithful, perhaps, villains from his previous thrillers also pop up (because of course, who doesn’t want to recall fond memories of eyeball gauging, cannibalism and torture?). The cynical, ambiguous conclusion to this wild, violent romp really makes you wonder about Cleave. And his fans...and me. I couldn’t put it down.

This wild, violent romp will raise questions about your mental soundness—when you can't put it down.