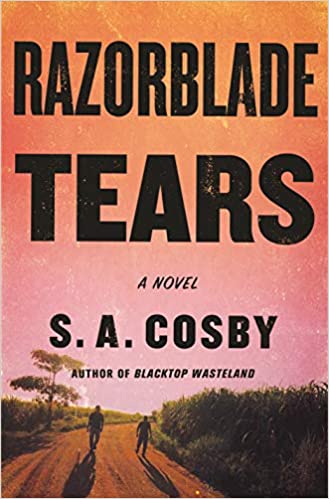 S. A. Cosby’s Razorblade Tears is a gritty crime novel centered on two grieving fathers lost in regret and pain. Ike Randolph and Buddy Lee Jenkins don’t have much in common. Both men are ex-cons, but Ike went straight and now owns a successful property maintenance business and Buddy Lee is an alcoholic truck driver who still works at the fringes of crime. Ike is Black and Buddy Lee is a redneck.

Their sons, Isiah and Derek, fell in love, had a daughter, and married after a long courtship. A few months after their vows, the couple was gunned-down outside an upscale wine store leaving Ike and Buddy Lee behind to mourn and rue their failure to accept their sons’ homosexuality. Buddy Lee is unable to sleep most nights, lying awake with bad memories and whispering, “my sweet little boy” to the darkness. Ike is calmly enraged at himself and the world.

After a few months, the police investigation goes quiet. Ike and Buddy Lee form an uneasy alliance in search of their boys’ killer, a search that brings the unlikely pair into an LGBTQ world as well as an encounter with a skinhead motorcycle club while searching for clues at Isiah and Derek’s house—but their sons’ murders are more complicated than simple hate.

Razorblade Tears is a violent and poignant novel about love, loss, acceptance, and forgiveness. It jags into the unexpected with themes of racism, homophobia, and hypocrisy. The narrative is often uncomfortable, especially when it smacks the everyday and thoughtless bigotry we’re all guilty of. Ike and Buddy Lee are flawed protagonists trying to understand their sons, the world, and each other. Their ultimate redemptions are costly, but the price of understanding is pain.