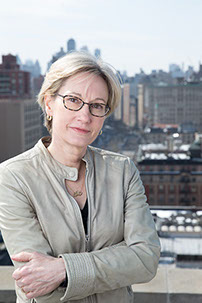 Carrie Smith is the author of the Claire Codella novels centering on NYPD Detective Codella. In the first book, Claire is returning from cancer treatment and she encounters some jealousy (she’d solved a high profile case before taking sick leave). In all the books, Smith embraces characters of all stripes and really delves into them, creating the kind of character-driven police novel that I as a reader truly enjoy. I also see echoes of a favorite writer of mine, Lillian O’Donnell, whose novels, beginning in the '70s, traced the path of a female cop and eventual NYPD detective as she encounters sexism as well as skepticism on the job. Both these characters get the job done with smarts and compassion.

You have established a wonderful series character in Claire, and now you are moving away from her. Are you done telling her story?

For the moment, but not forever. Claire is by now an old friend and I have no intention to abandon her. She has evolved dramatically since Chapter 1 of Silent City, when she returned to the NYPD after a 10-month battle with cancer and began to prove herself all over again. She’s confronted demons of her past, solved three high-profile cases, and reached a new place in her personal life. But there are unanswered questions, too. Who will replace her nemesis, Lieutenant McGowan? Will her relationship with Detective Brian Haggerty grow stronger, or will it founder? Can she keep up her breakneck pace without another health crisis? There’s more to Claire’s story, and there are endless pockets of New York City to take her into, but I feel that I’ve left her in a good spot while I challenge myself with a new set of characters dealing with different issues relevant today.

I know you have written a standalone—can you tell me about it? Is it a thriller? Traditional detective story? Police story?

The new book is a fast-paced thriller. A young hotel employee, Grecia Galindo, has been framed for theft and offered the dubious choice between facing criminal charges (that would lead to her deportation) and enduring sexual harassment. Grecia courageously refuses to accept exploitation, and she is on her way to see her attorney when she is abducted from a Manhattan street. On the same morning, her experienced attorney is murdered. The attorney’s fiery young associate, Riley Wittman, discovers her body and narrowly avoids becoming the killer’s second victim. Now these two very different young women must fight for their lives. To survive, they’ll need to confront powerful adversaries, unravel a conspiracy, and face their own pasts in order to embrace the future.

While this is the intimate, elemental story of two women’s harrowing trials, their stories are inspired by the larger cultural shifts happening now: the plight of undocumented people and the traumatic experiences of women who have come forward to tell their stories in the #MeToo movement.

What's important to you in telling a story? What is the key your novel will revolve around?

I have a few non-negotiables when I start a new crime novel. I need a cast of diverse, complex characters with credible and surprising motivations. I need a context—a world—that I can expose for readers, one they may find unfamiliar but intriguing. And I need a purpose that transcends plot.

My purpose in this new novel is to examine the concepts of justice and identity. Grecia Galindo and Riley Wittman are very different, but they ask themselves the same questions: Are they, and should they be, limited by the circumstances of their birth? Must they follow in the path of their parents? Is justice ever truly blind?

Can you talk about your writing process? I have met and talked with so many authors through the years, but have never met any one who approaches the task as you do.

I had to laugh at this question, because as I read and began to address it, I was walking down Riverside Drive employing the process you’ve alluded to. I do not like to sit at a computer and stare at the screen as I compose a first draft. I have trouble pulling ideas out of my head when I’m in such a static position. I like to write in motion. In a recent New York Times review of two new book on Nietzsche, the reviewer, Stephen Smith, noted that “Almost all of the great philosophers—Socrates, Aristotle, the Stoics, Rousseau, Kant, Thoreau—were walkers whose ideas germinated only in motion.” While I certainly don’t count myself in their company, I do know that my best ideas emerge while I am walking. I’ve drafted three Claire Codella novels on the Notes app on my iPhone. I email the notes to myself, download them into Word files, and only then do I sit at the computer. The fun part of writing is the editing. That is where you get to shape and mold, like a word sculptor.

You came late to your writing career, what preconceptions did you have entering the world of publishing? What have you learned since Silent City was published?

Actually, I came to publishing pretty early the first time. I was 23 when my first novel, a literary novel, was published by Simon and Schuster. Back then, I was too young to understand how to handle my good fortune. Now, I’m far more realistic about what to expect. Not only is it difficult even for talented writers to get published, but it’s even harder to stay published book after book. Your career is largely dependent on your own efforts to promote yourself. I am grateful to have an audience, and my biggest joy now is connecting with readers and other writers. My expectations are far more realistic.

Who is inspirational to you as a writer? What other writers have helped you on your journey?

I am a very eclectic reader, but some of the writers I tend to go back to again and again are Jane Austen, Margaret Atwood, Charlotte Bronte (Jane Eyre), PD James, Patricia Highsmith, and Agatha Christie.

I have been helped by many people in the crime writing community, but a few stand out. First and foremost, SJ Rozan who has been a mentor and friend since I began writing Silent City. Wendy Corsi Staub has generously opened many doors for me (and been a riotously fun companion at many Bouchercons). Kristopher Zigorsky recognized and drew people’s attention to the uniqueness of the Codella series. And of course, Aunt Agatha’s was a huge supporter.

Difficult question—what is your favorite book, and why?

I’m going to say The Handmaid’s Tale by Margaret Atwood. This book, published in 1986, was prescient—a startling reminder that our rights are as thin as the paper they are written on. Margaret Atwood never settles for lazy, predictable descriptions. And I admire the fact that she is a genre writer—one who deserves more acclaim than she’s received.

Carrie Smith is the author of the Claire Codella Mysteries from Crooked Lane Books, including Silent City, Forgotten City, and Unholy City. She is also the author of a literary novel Forget Harry. She is the recipient of three Hopwood Awards from the University of Michigan, a fellowship at the Fine Arts Work Center in Provincetown, and Killer Nashville’s Reader’s Choice Award. She is also a two-time finalist for Killer Nashville’s Silver Falchion Award and a finalist in Nimrod Magazine’s Katherine Anne Porter Prize for Fiction. By day, Carrie is senior vice president and publisher of Benchmark Education Company. She lives on the Upper West Side of Manhattan with her spouse and college-age twins.