Paris is for Authors: The City of Lights with Cara Black and Susan Elia MacNeal 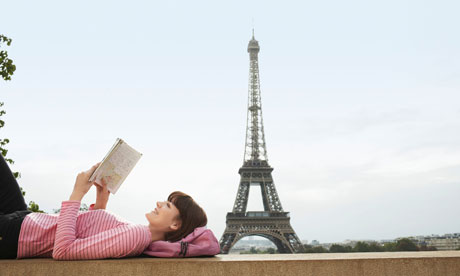 Research in Paris, a tough job but someone's got to do it, non? Authors Susan Elia MacNeal and Cara Black discuss one of their writing inspirations, the City of Lights.

Susan Elia MacNeal: Recently, New York Times bestselling novelist Cara Black (author of the Aimée Leduc series) and I crossed paths in Paris for one day. We had grand plans to meet up for dinner in the Marais—but then I canceled because of blisters (what was I thinking, trying to wear chic shoes on Paris pavements?)—and Cara had jetlag. But we did (and do!) have a lot to say on researching novels in Paris. And so until we can get back to the City of Light, this is what two novelists working in Paris are talking about—including research, pastries, and Philip Kerr.

Cara Black: Bonjour, Susan! Next time I know we’ll make it to the Hemingway Bar in the newly re-opened Ritz.…

MacNeal: Bonjour, Cara! Yes, I'm so sorry we didn't connect, but my hotel was right by the Leduc Detective Agency, so I felt close to both you and Aimee!

I've been to Paris twice before, but only for short periods of time and did mostly touristy things—the Louvre, the Eiffel Tower. This trip was different—devoted to World War II research, mostly of Britain's SOE (Special Operation Executive) secret agents who were sent to Paris as part of F-Section's “Prosper Network” and their connections with the Résistants. History tells us that there was one French SOE agent who was a double—or perhaps even a triple?

So I wandered around all of the relevant sites, such as 84 Avenue Foch (Gestapo headquarters dealing with foreign threats) and the Palais Garnier (one of my characters is a ballet dancer working undercover in the Paris Opéra Ballet).

What were you doing in Paris? 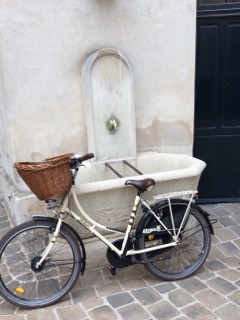 Black: Alors, Susan, I was getting wearing out my walking shoes on the streets of the sixth arrondissement. So much so, that I rode the Velib’, those bikes the City of Paris offer— the first half hour is free—to cruise the neighborhood. Riding a bike is something that helps me map out the "territory," as it were, and make more sense of the arrondissement as a whole. And after indulging at a patisserie—in the name of research—it keeps the weight down. This time I was re-checking distance and time—those logistics like, could Aimée walk to the Metro in time from here or would this passage make sense for her to take?

Several scenes happen in the wonderful Jardin du Luxembourg, so I spent a lot of time walking those gravel paths, sitting under the trees, and watching the boules players.

A question for you Susan, Philip Kerr, who writes the Bernie Gunther series, said that in his books he works within the lines of history and simulates the explanations of what could have happened. Your heroine, Maggie Hope, deals with historical characters and real events, so when you’re researching and the SOE files, as you point out, aren’t available, would you tend to agree with Kerr?

It’s always interesting to see how true to the perceived historical past you can veer from, what do you think? 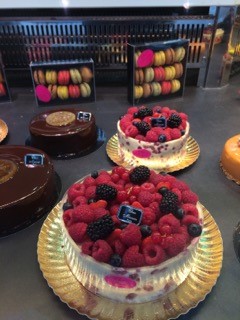 MacNeal: I managed to bypass (most) pastries, but did indulge in some ice cream on Île Saint-Louis.…

MacNeal: Of course! And if I could live in Paris, it would be there.

Cara, so funny you bring up Philip Kerr! Not only do I love his books, but I handled the U.S. reprints of his books when I was at Viking/Penguin in the early 90s! I love the Kerr quote and, yes, I definitely write about "what could have happened."

In this case, with The Paris Spy, most of the relevant files that tell the “real” story were either burned in a fire in 1946 (accident or deliberate?) or are not allowed to be opened until 2036. So I'm bound and determined to live that long to see what "really" happened to some of the real SOE spies in France. But in the meantime, it affords a lot of freedom to create what could have happened.

Since you've begun writing the Aimee Leduc series, technology has changed so much—pagers, answering machines, email, cell phones. Have all the new gadgets thrown you any curve balls as you continue the series? And how was it going back in time to write Aimee's prequel, Murder on the Quai?

Black: 2036 to open the SOE Archives? Wow, that sounds like the military archives in the Chateau de Vincennes. I was told that for some files they could only be opened 100 years, or more, from the last person’s death. The only explanation I heard was that it was to protect the descendants.

I loved writing about 1989, that’s when Murder on the Quai is set and it remains vivid to me since it’s when the Berlin Wall fell. I remember a divided Germany, being questioned by the Stasi for taking photos of the Wall. But my Aimée Leduc series is set in the ’90s, from 1993 and only up to 1999 so far. Technology represents challenges in some ways and in some ways not. Aimée doesn’t have to worry about Facebook, Twitter, or Instagram because they didn’t exist, and Google was evolving but it hadn’t become what it is now. Aimée uses dial-up. Remember that?

I’m guessing you use newspapers and magazines of the day, which I find incredibly helpful for fashion and world events. For me, Paris Match gave a snapshot of that week in 1989 and all the things that were on sale, what demonstrations were going on and what celebrities were doing. How about you? How specific do you like to get, and tell me about visiting the Paris Opera. Did you get behind the scenes, so to speak?

MacNeal: I do remember dial-up internet! It seems so insanely slow now.

Oh and yes, I got to go to the Palais Garnier! What a thrill! I saw a ballet there—a repertory program by students of the Paris Opéra Ballet school—and also did a behind-the-scenes tour. Having a glass of champagne during intermission and walking the length of the Foyer de la Danse was magical.

Ah, research in Paris—life is tough, right? You're so lucky to have all your books set there. What’s your favorite place to do research? 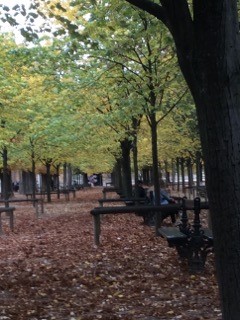 Black: My research takes a lot of forms. Sometimes it’s walking the streets at different times of the day to see how the light falls, note the regulars drinking their aperitif at the café. Or meeting up with [my friend] Gilles, who is an expert on underground Paris and has written several books about it. He even invited me to a party in the old quarry under the hospital and once to a air raid shelter used by the Luftwaffe under the Jardins du Luxembourg. It’s fascinating to see the layers of history under the pavement and cobblestones.

In the book I’m working on a lot of the story hinges on what happens under Paris. I met Gilles’ friends who travel with a crowbar, seriously, and pop the manhole covers and delve underground. There are so many layers—the sewers, the Metro, the telephone and fiber optic cables all with their own levels. How about you?

MacNeal: I agree about research—going at the right time of year, knowing what flowers are in bloom, how the light looks at a certain time of day.... I also like walking the exact routes my characters would take. Yes, you can look on a map, but, nothing beats really knowing in your bones what it feels like and what you might see.

I love that your friend Gilles took you to an air-raid shelter—underground Paris must be fascinating. It's so important to talk to people who are/were really there. I remember in Arisaig, Scotland, I was able to speak with a woman who was a girl during World War II and remembered what it was like to have the SOE training camps scattered around the area—and how proud everyone was to do "their bit." I'm also forever indebted to a friend of mine who's a London Blitz survivor, who reads over my manuscripts. She's filled in so many wonderful details.

Cara, I can't believe I've never asked you this, but what’s your connection to Paris?

Black: Susan, You are so fortunate to have a friend who lived during the Blitz and reads your work! My friend Toli, in his 80s, was a Résistant who loves to drive around Paris at night and show me places where he lived and hid during the war—those details he shares are amazing.

My connection to Paris comes from having a Francophile father and uncle who lived there and sent me to a French school. I guess my love affair with Paris started from that.

MacNeal: And now my love affair has just begun….

À bientôt, Cara! Until we meet at the Hemingway Bar at the Ritz!

Images throughout courtesy of Cara Black.

Susan Elia MacNeal is the Barry Award–winning and Edgar, ITW Thriller, Dilys, Agatha, Macavity, and Lefty Award–nominated author of the New York Times bestselling Maggie Hope mysteries, including Mr. Churchill’s Secretary, Princess Elizabeth’s Spy, His Majesty’s Hope, The Prime Minister’s Secret Agent, and Mrs. Roosevelt’s Confidante. She lives in Park Slope, Brooklyn, with her husband and child. She’s hard at work on the next Maggie Hope novel, The Paris Spy, which Bantam Books will publish in hardcover in August 2017.

Cara Black is the New York Times and USA Today bestselling author of 14 books in the Private Investigator Aimée Leduc series, which is set in Paris. Cara has received multiple nominations for the Anthony and Macavity Awards, a Washington Post Book World Book of the Year citation, the Médaille de la Ville de Paris—the Paris City Medal, which is awarded in recognition of contribution to international culture—and invitations to be the Guest of Honor at conferences such as the Paris Polar Crime Festival and Left Coast Crime. With more than 400,000 books in print, the Aimée Leduc series has been translated into German, Norwegian, Japanese, French, Spanish, Italian, and Hebrew.