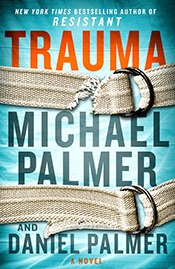 It’s not unusual for authors to collaborate with each other.

P.J. Parrish is actually two sisters; P.J. Tracy is a mother-and-daughter duo; Sparkle Abbey is two friends. Of course, other authors such as James Patterson just add their co-authors to the title page.

Daniel Palmer has collaborated with another author and, in this case, I am sure he would have given anything to avoid the reason behind this collaboration.

Daniel Palmer is the son of the late author Michael Palmer, a bestselling author of medical thrillers. Michael Palmer was working on his novel Trauma when he died suddenly on Oct. 30, 2013. He had suffered a heart attack and stroke the day before.

Throughout his career, Michael Palmer, who also was a physician, wrote 19 novels, many of which landed on the bestseller lists. His novels were known for their strong plots and views of the medical world. Those who knew Michael Palmer often commented on what a nice man he was.

Daniel Palmer, one of Michael Palmer’s three sons, inherited his dad’s writing talents and has written five thrillers. In addition, those who have met Daniel Palmer also have commented on what a nice man he is.

The two authors sometimes appeared on the same panel at writers’ conferences. When they were both at Sleuthfest a few years ago, it was interesting to see father and son talk about their respective writing careers and the respect and love each had for the other.

At the time of his death, Michael Palmer was working on the manuscript of Trauma, which would have been his 20th novel. Working through his grief, Daniel Palmer did what authors do best—he wrote, taking over Trauma to finish the novel for his dad.

As a result, Trauma is a unique novel that shows the strength of both authors’ work. Trauma comes out in May 2015.

Trauma’s plot revolves around Carrie Bryant, a physician who makes life-altering mistakes in two separate surgeries. She returns to her hometown where she becomes involved in an experimental program to treat PTSD.

This is the first time that Daniel Palmer ever collaborated with his father. Michael Palmer’s last novel, Resistant, was released in May 2014, after his death.

This isn’t the first time that a mystery writer has finished the manuscript of someone he or she cares about.

Last year, Les Standiford, director of the Florida International University’s creative writing program, and Dan Wakefield, who was the writer in residence at FIU for 15 years, finished the manuscript of their friend Anthony Gagliano, who had received critical acclaim for his first novel, Straits of Fortune. Gagliano was working on his second novel, The Emperor’s Club, when he suffered a stroke and died at age 53.

The two authors, both of whom have a number of fiction and nonfiction titles to their credit, spent a couple of years working on The Emperor’s Club.

After hearing about the project, their FIU colleague, and fellow author, John Dufresne agreed to edit the finished book. Dufresne also found a publisher, the small but growing MidTown Publishing.

Daniel Palmer’s father would be proud of the novel Trauma.