HEY RUBE! The Mystery Is at the Circus 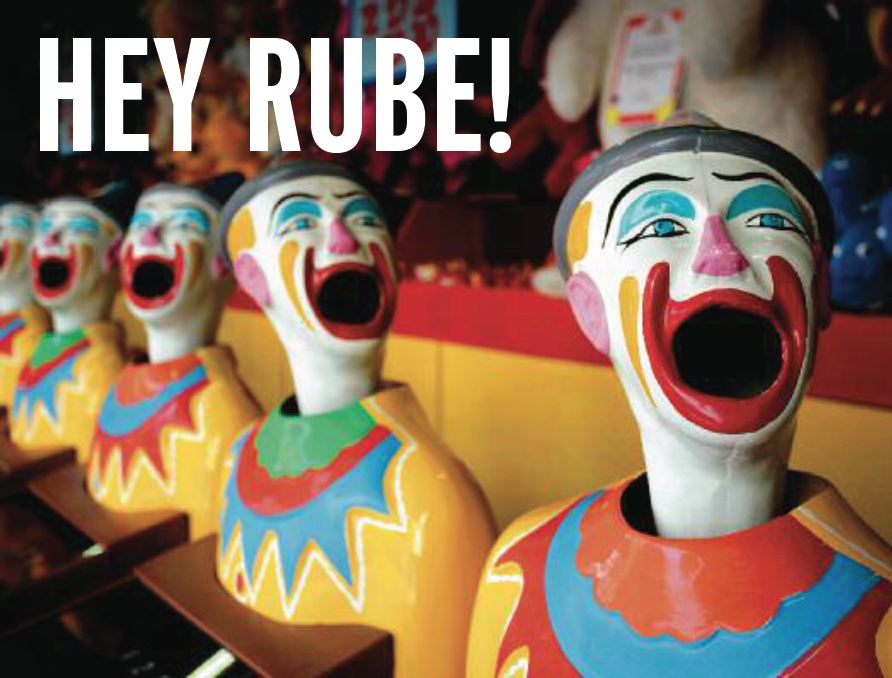 We’re all attracted to the unknown. Our eyes desire to be fooled, our hearts to be thrilled.

Step right in, ladies and gentlemen! See the trapeze flyers defy gravity! See a beautiful woman cut in half!

The big top’s colorful promise pulls us through the surrounding carnival midways, past the barkers and hucksters who are selling the promise of easy games.

The calliope music dances on the summer breeze. There’s the click and rattle of hastily assembled rides—coasters and spinners, Ferris wheels and swings. The eclectic odors of cotton candy, popcorn, churros, and corn dogs mingle with the pulse and beat and sweat of the crowd. The brightly painted signs—splashed yellow and red and white and blue—promise a glimpse at the world’s largest alligator, a three-headed snake, a bearded woman, the world’s smallest man and the strongest, too.

You won’t believe your eyes, folks!

The magic of the circus and its close relation, the carnival, is that it functions as an emotional doorway into our past. It’s a glimpse at the world through our younger eyes, before we understood how everything works. The tricks. The unfairness. The us and them. It’s this us and them—the insider and the outsider—that defines both our cultural lives and the circus. For an evening we volunteer to be the rubes, the marks, the outsiders, in a glittering and sensational world created by other outsiders—carny and circus folk—for no other purpose than our entertainment and their survival.

This friction of us and them is the catalyst that makes the traveling circus a perfect setting for a mystery story. It’s a setting that has been used to great effect in the genre, in both the hardboiled and traditional forms. There are the classics (my classics, anyway), Nightmare Alley, by William Lindsay Gresham, and Ride the Pink Horse, by Dorothy B. Hughes, but there are other novels that are far less familiar and yet worthy of our attention. 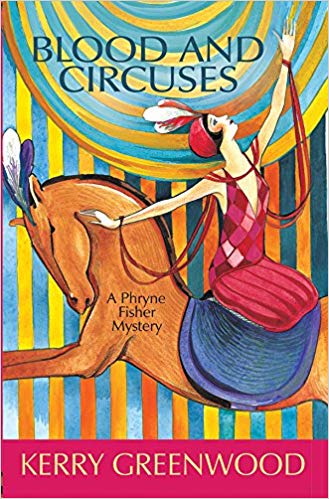 One such novel is Kerry Greenwood’s Blood and Circuses, the sixth Phryne (“rhymes with briny”) Fisher traditional mystery set in the roaring 1920s of Melbourne, Australia. Phryne, ever the debutante, is bored and the hours pass grudgingly. It’s a welcome surprise when her old acquaintance Alan Lee, a gorgeous half-gypsy carousel operator traveling with Farrell’s Circus and Wild Beast Show, arrives on a hot Sunday afternoon. Accidents have followed Farrell’s like a bad charm. Its best trick pony, “a real bonzer… Could do everything but talk,” was found dead, a tightrope broke under a walker’s feet, and the carnival’s strongman, Samson, was ambushed by five “assassins” with knives.

Phryne, compelled by her attraction to Alan Lee, quickly offers to help. She gets a job as a trick rider, a vocation she’s never before tried. She does surprisingly well and earns a ticket to the main performance. On a parallel track, the fresh-faced Constable Tommy Harris is investigating the locked-room murder of Mr. Christopher, an intersex who had a “half-man and half-woman” show with Farrell’s. The two investigations collide, generating the expected sparks, and a few unexpected sparks, too.

Blood and Circuses is at its best when Phryne is front and center, the circus as her backdrop. Phryne’s horse-riding scenes are exciting and feel authentic. The mystery is big, perhaps too big since, at times, the plot is a tad confusing. But in this novel, the circus is everything, with its vivid characters—an educated dwarf working as a carny because there is no other place for him, a singing clown who croons love sonnets at Phryne, a candy-stealing elephant, a bear that fancies the debutante—and its politics: the circus people (those performing in the big top) are the upper class with the carnival people lower, and the gypsies lower still.

While Blood and Circuses’ action occurs mainly at the circus, Margaret Maron’s Slow Dollar is all about a modern traveling carnival. Judge Deborah Knott, in her ninth mystery, is enjoying a Friday night at the Dobbs Annual Harvest Festival in Colleton County, North Carolina. The carnival has brought Colleton’s rural residents out to enjoy the rides and games, “against a cacophony of music, clacking machines, and hucksterism.”

Deborah is milling through the amusements and celebrating autumn’s arrival—even if it’s still hot as blazes—when she steps into an unmanned booth and discovers a corpse with a mouthful of quarters. The victim’s mother, Tally Ames, owns a handful of carnival joints. The murder hits the traveling carnies hard, but it does little to quiet the midways and arcades of its marks and rubes.

This is a leisurely mystery that, at times, is overrun by Deborah’s personal life, including a budding romance with deputy sheriff Dwight Bryant and the mysterious connection between Tally Ames and Deborah’s family. There are enough suspects and blind curves to keep it fresh but Slow Dollar’s real brilliance is in its evocative carnival setting. There is a wonderful three-page glossary of carny terms at the back which includes “the patch—the go-between for a carnival and the local authorities.” My favorite, and where this article’s title came from, “Hey Rube!” is defined as “The call for help when a carny is in serious bodily danger from outsiders.” 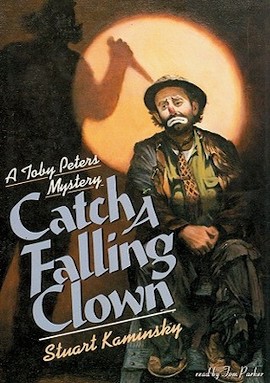 Stuart M. Kaminsky takes us back to the big top with his seventh Toby Peters novel, Catch a Falling Clown. It’s a medium-boiled private eye whodunit that is a sterling example of both Kaminsky’s amiable voice and a well-plotted mystery that perfectly portrays the insider/outsider circus vibe.

The Rose and Elder Circus—“a thin idea held together by favors, hope, and a few dollars…”—has had bad luck since starting its tour. When a circus clown witnesses an elephant’s electrocution, he thinks someone is trying to ruin the circus (elephants are expensive and hard to replace) and worse, trying to kill him before he can identify the perpetrator. When Toby arrives to investigate the elephant’s death, he’s greeted with a murdered trapeze flyer, a runaway elephant, and an unexpected suspect, the famous Alfred Hitchcock.

Catch a Falling Clown, set during a dreary Southern California winter in 1942, is a darker version of the circus. An elderly carny tells Toby: “I’ve seen a few murders. Not with this circus, but others. I’ve even helped cover them up.” The outsider status of the carnies and performers is played well. They protect Toby from the local law by sheer will, and when his usual sidekicks arrive (a dwarf, a nudnik dentist, and a 250-pound wrestler-poet), the story crashes into a surprising climax.

We stay with the big top in Alan Melville’s Golden Age whodunit, Death of Anton. Inspector Minto, an off-duty Scotland Yard detective, is ensnared in a perplexing murder case when he and Carey’s World-Famous Circus and Menagerie arrive in a small English village. The circus is in town to perform and Minto is there for his sister’s wedding. In short order, Anton, the circus’s headliner, is found mauled to death by his seven Bengal tigers. At first glance it appears to be an accident, but when Minto discovers the bullet lodged in Anton’s head it becomes a simple murder. Minto finds the mystery irresistible and he has plenty of material to play with since almost everyone has a motive to kill Anton, including the jealous trapeze flyer, Lorimar, Dodo the Clown, and the shady circus owner, Joe Carey.

But it’s not the mystery that makes Death of Anton so enjoyable. Instead it’s the witty dialogue and the exuberance of the narrative. It reads like an eager teenager reciting an especially wonderful event. The playful circus performers, with their petty rivalries, and the odd situations Melville creates for Inspector Minto elevate Death of Anton from the ordinary to the unusual.

These are only a few of the mystery novels with a circus as setting, and they should be seen as nothing more than a sampling. After all, it’s the pitchman’s deep and velvety voice—step right in, folks!—that stimulates our sense of wonder, our excitement, rising and falling with the cadence of his words. And it’s that mystery of what we’ll find on the other side of the canvas barrier, or inside a book’s dusty cover, that keeps us returning again and again.”

Ben Boulden is the author of two Western novels, both with a criminal slant. His stories have appeared in mystery and science fiction magazines.