Sue Grafton died December 28 in Santa Barbara, California, following a two-year battle with cancer. She was 77. 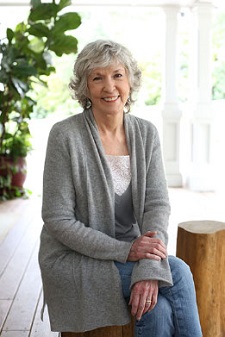 In announcing Grafton’s passing, her daughter posted this on the Sue Grafton Facebook page:

“Hello Dear Readers. This is Sue’s daughter, Jamie. I am sorry to tell you all that Sue passed away last night after a two-year battle with cancer. She was surrounded by family, including her devoted and adoring husband, Steve. Although we knew this was coming, it was unexpected and fast. She had been fine up until just a few days ago, and then things moved quickly. Sue always said that she would continue writing as long as she had the juice. Many of you also know that she was adamant that her books would never be turned into movies or TV shows, and in that same vein, she would never allow a ghost writer to write in her name. Because of all of those things, and out of the deep abiding love and respect for our dear sweet Sue, as far as we in the family are concerned, the alphabet now ends at Y.”

(Her final book, Y Is for Yesterday, was published in August.)

Mystery Scene offers our sincere condolences to her family, friends, and readers.

Grafton’s best-selling “alphabet series,” featuring Southern California private detective Kinsey Millhone, made her one of the most popular mystery novelists of her time.

For many of us who began reading about Kinsey in her early days, Grafton’s character was more than just a private detective, and her novels were more than just another mystery series to be enjoyed.

The Kinsey Millhone novels were true touchstones, cultural icons, and, in some way, life changing.

It began with these opening lines:

“My name is Kinsey Millhone. I am a private investigator, licensed by the state of California. I am thirty-two years old, twice divorced, no kids. The day before yesterday I killed someone and the fact weighs heavily on my mind.”
—the opening lines of A Is for Alibi

I clearly remember when a friend of mine mentioned that he had heard about this new author who had these kind of cute titles—each began with a letter of the alphabet—and they were about this female private detective. I had been a lifetime mystery reader since I was about nine years old. I started with Rex Stout, Agatha Christie, Raymond Chandler. To this day I have never read a Nancy Drew or Hardy Boys (though I liked the TV series.)

But at the time I had stopped reading mysteries because no new author was speaking to me. Until Sue Grafton (and, to be fair, Sara Paretsky and Marcia Muller). 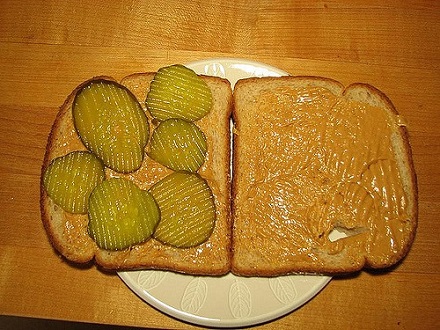 Here was Kinsey, who could easily have been a friend I hung out with. Like me, she was independent, unmarried, no children, supporting herself. I may have had more clothes than she, and more than just that one black dress. But I had been known to, at times, trim my bangs with manicure scissors. The big differences were that I had a dog, owned my own home, had a few plants, and had a close relationship with my parents.

And I did not eat peanut butter and pickle sandwiches, a staple in Kinsey’s diet.

But beginning in 1982, with A Is for Alibi, and through the 25th letter of the alphabet with her final adventure, Y Is for Yesterday, published in August 2017, Kinsey was there for me.

Like all of us, Kinsey changed through the years, though Grafton almost imperceptibly allowed her to grow. Kinsey was still the single, cranky-minded private detective as she was in the beginning. She had a close relationship to her landlord, Henry, who became her surrogate father. But she also began to open herself up, just a bit. She got involved with the relatives she didn’t know she had. Y Is for Yesterday actually found Kinsey embracing, almost, a cat and a dog. That was a huge start for her.

Not every plot worked. But around M Is for Malice, the novels underwent a sea change and became a bit deeper and even richer.

But I always maintained that most of us didn’t read the Grafton novels for their deep plots or look at social issues. We just wanted to see what Kinsey was up to. What scrapes she got herself into. Would she ever date again? Would she ever splurge on clothing or a good handbag?

I was as shocked as anyone when in V Is for Vengeance Kinsey is looking through the lingerie department at Nordstrom’s. But she was about to turn 38 years old and we all know that Kinsey can’t resist the lure of the good sale.

So there she was, in Nordstrom’s lingerie department, “sorting through ladies’ underpants on sale—three pair for ten bucks, a bonanza for someone of my cheap bent.” She even thought about buying silk pajamas, marked down to $49.95 from $199.95. “Most nights I sleep in a ratty oversize T-shirt. At $49.95, I could afford to indulge. Then again, I’m single and sleep alone, so what would be the point?”

Used to “low-end chain stores, where aisles are jammed with racks of identical garments, suggesting cheap manufacture in a country unfettered by child labor laws,” Kinsey is seduced by Nordstrom’s, “a palace by comparison, the interior cool and elegant.”

But as usual, Kinsey is always working, so while she stocks up on underwear, she also witnesses two shoplifters who jump-start the plot of V Is for Vengeance.

I think Grafton’s novels didn’t just speak to readers but also influenced other authors. Her success, as well as that of Paretsky and Muller, opened the door for other strong female private detectives, cops, and amateur sleuths. These authors also showed publishers that mystery readers would follow characters anywhere and opened the way for detectives of color as well as gay and lesbian detectives.

Grafton received many awards during her career. She and James Lee Burke shared the Grand Master award in 2009 from the Mystery Writers of America. She also was nominated for the Edgar Award in 1991 for best short story, “A Poison That Leaves No Trace” in the Berkley anthology Sisters in Crime 2, and in 1986 was nominated for best TV feature or miniseries for “Love on the Run” with her husband, Steve Humphrey, for NBC-TV. 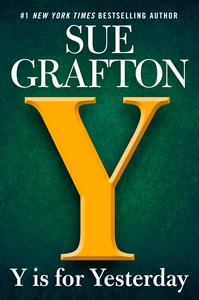 The Kinsey novels were generally released two years apart. In an interview with the Louisville Courier-Journal, Humphrey said his late wife had not yet started writing her last book in the series.

“She was trying to come up with an idea, but she never got one she liked,” he said. “With chemo, she didn't have much energy or interest in that anyway. There will just be a 25-letter alphabet, I'm sorry to say,” he told the newspaper.

But apparently she did know the title. “She always said that last book would be Z Is for Zero,” Humphrey told The New York Times. “She’d been saying that for 30 years.”

The Kinsey novels began in the 1980s and now, with Y Is for Yesterday, end just a few months into the 1990s. “Z” would have been set firmly in 1990 and Kinsey’s 40th birthday would be nearing.

Now we can only speculate on what changes might have occurred in Kinsey’s life. Would she have remarried—third time the charm? Would she have become the guardian of a relative, as she was when her Aunt Ginny took her in when she was four years old? That would bring her life full circle.

I hope the family keeps its promise and allows the alphabet to end at Y, forcing us all to use our imagination.

Rest in peace, Sue Grafton. You and Kinsey will be missed.