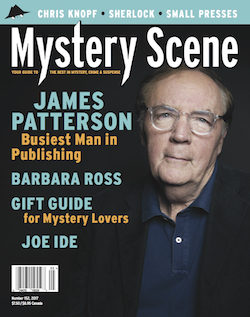 It all began with the Edgar-winner The Thomas Berryman Number in 1976 but 183 novels later—135 of which are New York Times bestsellers—Patterson is a publishing phenomenom.
by Oline H. Cogdill

She was once the bestselling crime novelist in the United States.
by Michael Mallory

A small town in coastal Maine is the setting for Ross’ popular cozy tales.
by John B. Valeri

Blasting onto the scene with his award-winning IQ, Ide’s “hip-hop Sherlock” is back.
by Oline H. Cogdill

Here’s a dazzling array sure to please your favorite crime fiction fan.
by Kevin Burton Smith

Not only is he writing acclaimed novels, Knopf has just become a partner in the venerable Permanent Press.
by John B. Valeri

A mid-century police procedural writer who is due for a revival.
by Jon L. Breen