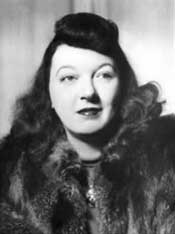 Craig Rice (born Georgiana Ann Randolph Craig) worked in public relations and radio until, at age 31, she began a crime-writing career that so successfully mixed hard-boiled action and screwball comedy she became the first mystery writer to appear on the cover of Time magazine. Though she authored one-offs (Home Sweet Homicide, Innocent Bystander), a second series about a pair of genial con men named Bingo and Handsome (The Sunday Pigeon Murders, The Thursday Turkey Murders), ghosted (George Sanders’ Crime on My Hands), and wrote screenplays (notably The Falcon’s Brother and the unjustly forgotten Lady of Burlesque, adapted from Gypsy Rose Lee’s The G String Murders), her popularity was due mainly to her series featuring the raffish, hard-drinking, corner-cutting Chicago defense attorney John J. Malone. Malone not only solved crimes he frequently offered to defend the guilty. His debut was in the 1939 novel 8 Faces at 3. In that and ten novels that followed, Malone shared the crime-light with his best friends, Jake and Helene Justus, the former a fast-talking publicist, the latter a bright, beautiful heiress—in other words, a considerably more boozy Perry Mason combined with a slightly less boozy Nick and Nora Charles. Rice cleverly employed Jake and Helene in each plot, but as the series progressed Malone moved closer to center stage. And, as many short stories, radio, television and at least one of his three film appearances would prove, the shrewd, charismatic lawyer worked well as a solo act.

Most, if not all of the Malone novels are available, used or e-booked, but, as best I can tell, none is available in audiobook format. The books are worth seeking out and ordering or downloading, particularly The Big Midget Murders (my personal favorite), The Lucky Stiff, and a surprisingly harder-edged Trial by Fury.

• Having Wonderful Crime (1945), adapted from Rice’s 1943 novel of the same name, features the ideally-cast Pat O’Brien as Malone (given a new first name of Michael for reasons lost to cinema history), with George Murphy and Carole Landis, perfectly acceptable as Jake and Helene, in a classic screwball mystery.

• The Lucky Stiff (1949). Produced by no less a celebrity than Jack Benny, this adaptation of one of Rice’s better novels (her favorite) by director-screenwriter Lewis Foster eliminates Jake and Helene but Brian Donlevy as Malone, Claire Trevor as his loyal assistant Maggie and Dorothy Lamour as a nightclub singer who seemingly returns from the dead act the hell out of a script that doesn’t quite capture the novel’s wit and charm but gets the 1940’s attitude and atmosphere just right. Comic actor Billy Vine is notable in the role of Malone’s favorite bar owner Joe the Angel.

• Mrs. O’Malley and Mr. Malone (1951). The short story on which this fast-moving, entertaining B-flicker is based, Once Upon a Train, by Rice and Stuart Palmer, finds their series characters, Malone and schoolmarm-sleuth Hildegard Withers, faced with a murder on a moving train. James Whitmore is a fine boozing and womanizing Malone to Marjorie Main’s Mrs. O’Malley, a shrewd, no-nonsense small-town moralist substituted for Ms. Withers who may still have been under contract to RKO. (See her sleuthing in The Penguin Pool Murders, Murder on a Bridle Path, et al.)

(Crime and Mrs. O’Malley are available as a “mystery double feature” DVD from Warner Archive. Stiff was recently removed from YouTube, but, at the moment, several DVD-R copies are available from www.lovingtheclassics.com, quality not sampled.)

• The Old Gold Comedy Theater (1945) presented a half-hour adaptation of the film Having Wonderful Crime. The show’s master of ceremonies, film comedy legend Harold Lloyd, introduced O’Brien, reprising his Malone role, and as the Justuses, Tom Conway and June Duprez. (Available from the Internet Archive of Old Time Radio.)

• Murder and Mr. Malone (1948) was the first radio series to feature Rice’s Chicago barrister, initially portrayed by Frank Lovejoy. In spite of the fact that each show had at least one homicide, the title was shortly changed to The Amazing Mr. Malone. During its four-year run of 30-minute episodes on ABC and then NBC, Lovejoy left to pursue a film and TV career and Gene Raymond stepped into the courtroom. Eventually George Petrie starred “as the lawyer whose practice before every type of bar has become a legend.” (A few shows may be streamed or downloaded from www.oldtimeradiodownloads.com.)

• The Amazing Mr. Malone (1950), a TV movie/pilot, featured Gene Raymond, who was radio’s Malone at the time. Also on hand was Fred Clark, from the radio show, and Raymond Burr in one of his first TV appearances.

• The Amazing Mr. Malone (1951–1952). These 13 30-minute episodes, which may have been live, starred Lee Tracy as John J. Malone. Neither the series nor the TV movie seem to be available.

• Mystery Writers Theater (aka George Sanders Mystery Theatre) (1957). Host Sanders introduces Rice’s And the Birds Still Sing. The original short story that debuted in Ellery Queen’s Mystery Magazine featured Malone. This adaptation stars John Archer as a Los Angeles lawyer very much in the Malone mode but named Frances Parnell. It’s a good little mystery, available for the moment on You Tube (from which shows are disappearing at an alarming rate).

For an extensive coverage of Craig Rice’s eventful, hard, and relatively short life, along with a closer look at her books, I recommend Jeffrey Marks’ Who Was That Lady? (Kindle, Hardcover and Audible, read by Natalie Baker Shirer).