“Some say life is the thing, but I prefer reading.”
—Giles Mont, A Judgement in Stone, 1977, by Ruth Rendell 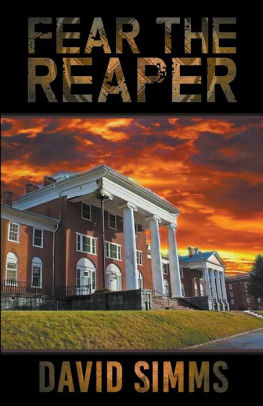 Set in 1933 Virginia, David Simms’ Fear the Reaper tells the story  of psychologist Samuel Taylor,  who travels to the Shenandoah  Valley to take a job at Western  Valley Hospital, an asylum run  by Dr. Joseph Dejarnette. A leading proponent of the “science”  of eugenics, Dejarnette has brought Taylor to the facility  because of a test he has developed, a variation on the Stanford-Binet exam, meant to identify those who exhibit below-average intelligence. Dejarnette, however, sees the test as a way of validating his heinous personal views, helping him in his misguided crusade to purify humanity, removing the dire threat he perceives from so-called “inferior races.” As Taylor begins to realize the extremity of Dejarnette’s views and methods, he vows to end his superior’s reign of terror. Unfortunately, the odds are against him, as Dejarnette is backed by some of the most powerful and ruthless potentates in America.

Disturbing and chilling, because, yes, it can (and did) happen here, Fear the Reaper evokes strong emotions whose effects will linger long after you finish. Simms employs a slow, steady build to a dark finale, allowing for deep character development, and for the horror to mount. Although it’s set in 1933, it’s oddly resonant in these days of renewed racism and intolerance.