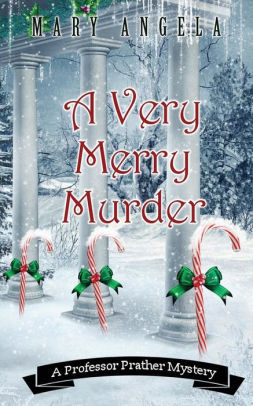 Mary Angela’s A Very Merry Murder, although set on a modern university campus in South Dakota, is structured like an Agatha Christie Golden Age whodunit. The book follows Christie’s tracks all the way from the entrance of the obnoxious soon-to-be-murdered victim to the final face-off in a room full of suspects. With the police looking on benignly, Emmeline Prather, our clever sleuth, names the killer. Gasps abound. Making all this work is the fact that Emmeline is teaching Crimes and Passion: Women Writers of the 21st Century, and therefore has some knowledge of murder and the people who commit them. In fact, during one classroom discussion of Christie’s “The Cretan Bull,” Emmeline gets a clue that helps her solve the crime. All this is set during the days leading up to Christmas, with snow on the ground and Christmas decorations hung everywhere. Author Angela has a nifty talent for description, and although it was still full summer when I read this book, her painting of the South Dakota wind had me shivering. The holiday season is also relative to the plot. For the winter festivities, a visiting quartet named Jazz Underground is poised to entertain, but unfortunately, Miles Jamison, the quartet’s famous bass player/music professor, dies during a pre-concert celebration. At first it looks like an accident: he fell while Emmeline was rejecting his amorous advances. To reveal more would be giving away too much, so let’s just say that the true method of death is one beloved by Christie, who used it in several of her books. A Very Merry Murder makes for a delightful holiday read, with an entire chapter devoted to choosing the right Christmas tree, and another given over to a performance of Dickens’ A Christmas Carol. Emmeline is a smart and well-read sleuth, and her fellow professors are never boring. My only quibble with this book is the motive. Then again, many men have been murdered for less.