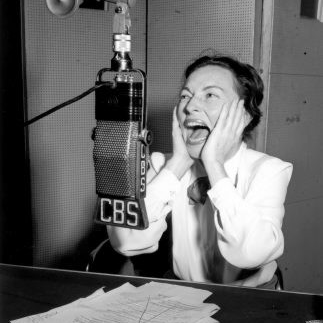 The old coast-to-coast radio networks and their weekly dramatic programs are gone, but radio drama (including mystery stories) persists here and there in America, England, and Canada. Meanwhile, great shows from the past can be enjoyed today on audiotape, on CD, and online.

Rebecca
The Campbell Playhouse / Mercury Theater on the Air
December 9, 1938

Orson Welles and his Mercury Theater on the Air did many notable live-radio dramatizations of well-known mystery stories during the 1930s and ’40s, including William Gillette’s Sherlock Holmes stage-play, G.K. Chesterton’s metaphysical puzzler The Man Who Was Thursday, and Dashiell Hammett’s hard-boiled novel The Glass Key. The Mercury’s one-hour 1938 version of Daphne du Maurier’s then-bestselling novel Rebecca is of special interest on several counts. It precedes the David Selznick-produced, Alfred Hitchcock-directed 1940 film and in some ways surpasses it, especially in the performance of Margaret Sullavan as the otherwise-unnamed “second Mrs. de Winter.” Also memorable are Agnes Moorehead as a Midwestern snob at prey in the UK, and Mildred Natwick as the creepy housekeeper Mrs. Danvers (“Why don’t you jump now and have done with it? … Go on, go on, go on, go on!”). 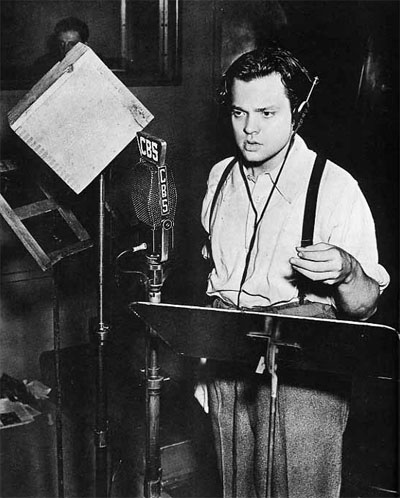 Orson Welles (right) became a worldwide celebrity with the broadcast of War of the Worlds in 1938. He had already made an impression on a generation of children as the voice of Lamont Cranston in “The Shadow.” Photo: CBS.

Welles himself is fine as the vague, tormented master of Manderley. And this adaptation of Rebecca, being the first commercially sponsored Mercury show after the troupe’s notorious War of the Worlds broadcast, comes wrapped in lots of extravagant Wellesian puffery—and Campbell’s Soup.

Splendid, too, is the music of composer-conductor Bernard Herrmann, whose orchestral interludes create near-visual effects to underscore and link the scenes.

Finally, “direct by short wave from London,” there’s an interview with author Daphne du Maurier, who gives these directions to the “real” Manderley:

“Get into a train at Paddington Station and travel west. When you’ve been 250 miles, get out of that train and walk southeast for half an hour. You’ll come to some iron gates, a lodge, and a narrow twisting drive. If you ever find your way to the end of that drive, you may discover Manderley.”

“Deep in the hearts of most of us, there must be a suppressed longing to emulate Sherlock Holmes and the other masters of his profession,” guessed Lux host Cecil B. DeMille in his introduction to this broadcast. “How else can you explain the appeal of the mystery story to farmer and financier, haberdasher and housewife, chorus girl or—clergyman? A shiver running down the spine is no respecter of persons.”

Mysteries were often done on the Lux Radio Theater, a weekly show that ran from 1934 to 1955 and specialized in presenting live-radio versions of recent hit movies. Lux was a big-budget show broadcast from Hollywood, and often featured most if not all of a spotlighted film’s stars. Also included were a full orchestra, a large ensemble of character and atmosphere players, and elaborate sound patterns. All of this helped create the effect of a motion picture on radio—all performed live for a theater audience. These were deluxe productions, so to speak. 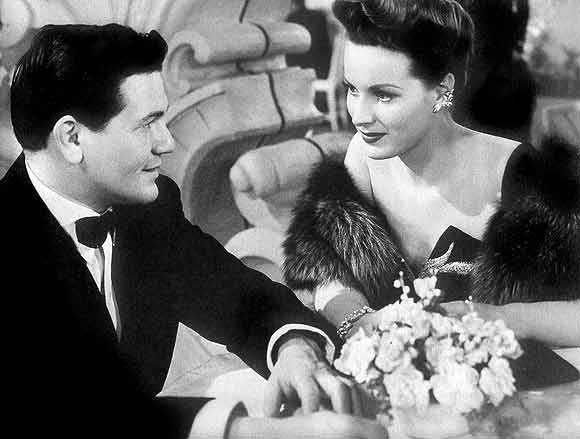 John Garfield and Maureen O’Hara (left) starred in the 1944 film The Fallen Sparrow and in the radio adaptation on The Lux Radio Theater. Photo: RKO Pictures.

Robert Young, Maureen O’Hara, and Walter Slezak are the leads in this adaptation of the RKO picture The Fallen Sparrow, based on a novel by Dorothy B. Hughes (Ride the Pink Horse, In a Lonely Place). Young plays a fellow escaped from a Fascist-Spanish prison after fighting for the Loyalist cause. He’s made his way to New York in 1940 to look into the suspicious death of the police-detective friend who helped him to freedom; he’s convinced his pal was murdered, and he thinks he knows who did it: Axis agents who covet the Loyalist relic that Young’s character smuggled out of Spain. Mingling with the émigré-refugee set in Manhattan, the hero hunts the German spy he’s certain is on his trail.

The Fallen Sparrow is interesting for its evocation of global politics before Pearl Harbor, and for Young’s performance as the emotionally damaged torture victim who can go from wisecracks to panic attacks at the sound of an echoing footstep. (“The wounds on his body are mended, but the wounds on his mind are slow to heal.”)

One of the best and longest-lasting U.S. radio-drama series was Suspense, which began its regular run in 1942. Supervised during its best period by the highly-regarded producer William Spier, Suspense used top Hollywood talent (including Cary Grant, Ronald Colman, Joan Crawford, and James Stewart) in adaptations of crime-fiction tales by such genre masters as Cornell Woolrich, Dorothy Sayers, John Dickson Carr, Raymond Chandler, Dashiell Hammett—and T.S. Stribling, the Pulitzer Prize-winning author of this bizarre gem, which begins in Trinidad and ends somewhere in the Twilight Zone. 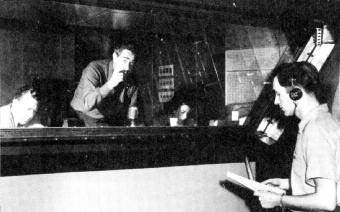 Producer-director (and occasional actor) William N. Robson (right) in the control booth. Robson started out on the West Coast in the mid-1930s as the writer-producer of Calling All Cars. Moving to New York, he worked on The Man Behind the Gun (a wartime series), Escape, Suspense, Columbia Workshop, and many other shows. Photo: CBS.

Paul Stewart (the creepy butler in the movie Citizen Kane) plays the American psychologist Henry Poggioli, on Caribbean sabbatical when he learns of the murder of a young Hindu bride, slain during a night spent in a temple for a purification rite. Five beggars found sleeping at the scene are immediately suspected, but Poggioli presses ahead with his own informal investigation—with extraordinary results.

Among the fine supporting cast is Barry Kroeger (who doubles as the show’s announcer). The music of the peerless Bernard Herrmann is superbly integrated into the texture of this strange saga, whose final line sends the listener’s mind reeling into another surreal dimension.

This well-written, well-acted show was heard only on the West Coast for most of its 1942–1955 run. It was narrated sardonically by the eponymous shadow-lurker who saw all and told all a bit at a time, taunting and mocking the modern fools whose criminal schemes he chronicled.

In “Perfect Alibi,” LA private investigator Johnny Seltzer (played by Jack Webb) is approached by a beautiful would-be heiress who offers him $50,000 to help her escape the clutches of a local hoodlum. Johnny falls hard for this temptress, and he thinks he has the perfect scheme to win them both what they want. But given the Whistler’s penchant for a story with a sting in its tail, Seltzer’s plans are almost certain to fall flat in some unforeseen manner. In the late 1940s, it seems, only the cosmic gall of the Whistler could foil the success of the sort of tough-talking private-eye then ubiquitous on the airwaves (Webb himself starred in three such series).

The talented William N. Robson was the producer/director of Escape, a “dramatic adventure anthology” which ran from 1947 to 1954 as a sort of low-budget, high-energy supplement to Suspense. The series mixed adaptations of short stories and novels (Ambrose Bierce’s “An Occurrence at Owl Creek Bridge,” Joseph Conrad’s Typhoon) with original scripts like this exercise in radio noir by Morton Fine and David Friedkin.

In “Pass to Berlin,” a US soldier in postwar Berlin (played by radio stalwart Stacy Harris), on the run from a crime of passion, falls under the spell of a blind female nightclub entertainer, a “mentalist” who seems to have tumbled to his guilty secret. But perhaps she’s simply an instrument of fate, sent to provoke his self-destruction. Then there’s the woman’s blackmailing partner, whose interest in the increasingly frantic narrator-protagonist is merely mercenary, if no less dangerous.

As with most of the series mentioned in this compilation, the choice of one episode as “best” is arbitrary. “Pass to Berlin” is representative of Escape’s high level of quality. For a less crime-oriented but unforgettable listen, hear Escape’s adaptation of Roald Dahl’s “Poison” (July 28, 1950), in which William Conrad succumbs to a fit of hysterical bigotry doleful witnessed by Jack Webb.

Correction: In the original publication of "Mystery on Air" from print Issue 90 of Mystery Scene, the actor John Garfield, pictured with Mary O'Hara in the 1944 film The Fallen Sparrow, was mistakenly identified as the radio actor Robert Young. The error was corrected for the online publication of the series.