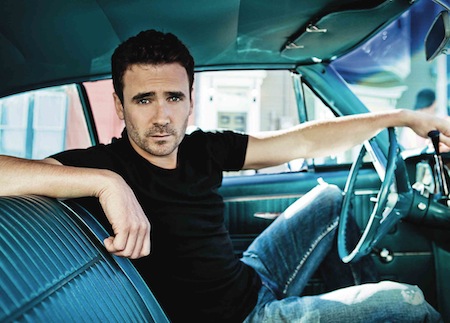 Perhaps the reason for the dearth of quality private eye shows on television has nothing to do with changing fashions, the cheap-to-produce cheap thrills of reality TV (Dummy Boo Boo, America Can’t Sing, Nose Pickers, etc.) or even the insane popularity of slow-mo vivisection featured in cop shows like CSI: Spleen or Rizzoli and Intestines.

No, maybe the underlying blame is of a more automotive nature. What if it’s simply that there are no more cool cars out there?

Remember the good old days of Rockford in his gold ’74 Firebird trying to lose a couple of gun-toting gorillas while simultaneously attempting to sort out yet another hopelessly convoluted scam? Or Magnum zipping around the Big Island in his bright red Ferrari 308 GTS, the wind blowing through his moustache? Mannix in that snazzy, George Barris-customized Oldsmobile Toronado ragtop he sported in the show’s first season? Or Kookie peeling up in front of 77 Sunset Street, tires squealing, in his souped-up Bucket T with the crazy flame job, and asking Daddy-O if he could borrow a comb?

Those were the days, my friend, when TV’s private eyes drove cars that were as much a part of the show as the detectives themselves. We’re talking personality here.

Honey West in her pearl white Shelby Cobra, a car almost as hot as Anne Francis. The jeans-wearing Robert Urich as Dan Tanna putting on the glitz in Vega$ with an immaculate cherry red 1957 T-Bird convertible, and then moving on to Spenser: For Hire, where he screamed around the streets of Beantown in a similarly classic ivy green 1966 Mustang Fastback, terrorizing pedestrians and vintage car lovers alike. Or sad sack everyman gumshoe Harry O, whose dented, rusty Austin-Healey Sprite was always in the shop—or heading that way. 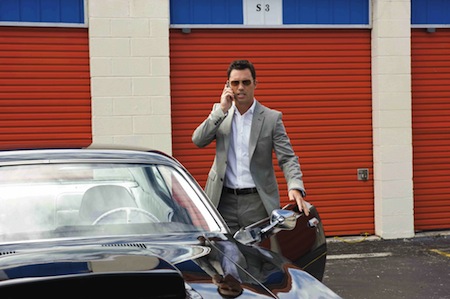 You could probably blame this ongoing cool eye/hot wheels love affair on—no, not Stephen Cannell—but on one of the earliest TV eyes of all, Eddie Drake, who drove a rare three-wheeled Davis D-2 Divan in the The Cases of Eddie Drake, filmed way back in 1949, more than two decades before anyone ever heard of Jim Rockford.

So maybe it’s no coincidence that the three private detective shows currently running on North American television all feature cool—or at least distinctive—automobiles.

When Burn Notice’s Michael Westen, everybody’s favorite burned spy and reluctant Miami gumshoe, first wheeled out his black ’73 Dodge Rallye (that once belonged to his abusive father), I wondered if it was the final gasp of a TV trope last seen in the ’80s. Or was it an homage? Or was it simply the fact those old muscle cars were virtually indestructible? Over the course of the show, the Dodge has been burned up, crashed, mashed, and blown up several times, as well as shot up on a very regular basis. Michael explained in the very first episode that he prefers driving older cars so that he wouldn’t be pinned by the airbag in the event of a crash, but given the amount of automotive abuse the Dodge has gone through, I suspect Michael also takes some perverse pleasure in putting his old man’s wheels through the wringer.

And where would Shawn and his hapless partner Gus, the two “police consultant” doofuses from the USA Network’s Psych, be without their bright blue Toyota Echo? Toddling around the sun-dappled streets of Santa Barbara just wouldn’t be the same without “The Blueberry.” It’s a pipsqueak of a machine, a refugee from an automotive flea circus and about as far from “cool” as you can get, yet this smart-but-goofy car kind of suits the show. And it probably gets better mileage than any of the other cars I’ve mentioned, so there. Polar bears probably think it’s cool. 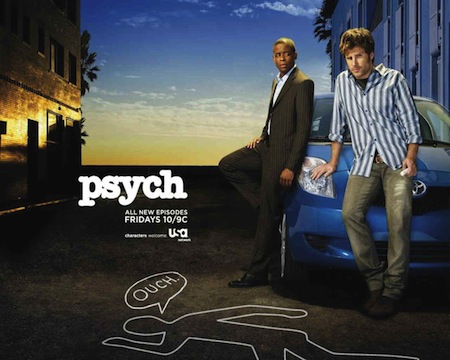 But the coolest PI car currently smokin’ its tires and grabbing air has to be Jake Doyle’s 1968 Pontiac GTO. Sure, you might say it’s just another retro muscle car trotted out to nab some coolness cred, but in the first three seasons of Republic of Doyle, a CBC comedy/drama set in Newfoundland, the car has served unexpectedly well as its owner’s alter ego. Yep, it’s juvenile and immature and occasionally ridiculous, and certainly rough around the edges, but it can take a licking, it’s loyal to a fault, and, darn it, it’s even kinda sexy. And so, Jake tears up and down the twisty-turny streets of St. John’s like a lunatic, much to the chagrin of his stern, no-nonsense father and partner.

The car was chosen, according to writer/producer Allen Hawco (who plays Jake) as a deliberate nod to The Rockford Files. Although there’s a little wish fulfillment in there as well. In his teens, Hawco confesses, “I always wanted to have a GTO.” The car has certainly earned its keep, being regularly involved in high-speed chases and catching more than a few dings—and bullet holes—in the process. But last season’s finale truly ended with a bang—the GTO was blown up. You could hear gearhead hearts breaking all over Canada. What else could the network do? They ran an obituary.

1968 PONTIAC GTO. Passed away suddenly when detonated into a fiery ball of death on the St. John’s waterfront at the end of Season 3. Survived by her owner of many years, Jake Doyle. No flowers, please. Donations welcome.

Born in 1968, an Azure Blue, automatic transmission, 360 HP, beautiful metal beast, Jake’s GTO met her untimely demise as an innocent bystander to an intense Doyle case. Until the moment all went boom, she served our hero well for three seasons - the GTO was one of Jake’s most reliable allies, propelling him through countless car chases around the streets of St. John’s, handled like a dream around curving dirt roads, and was just about the best getaway vehicle the ultimate instigator, Jake, could ever ask for. May she rest in peace.

As the show’s theme song would put it, “Oh yeah!”