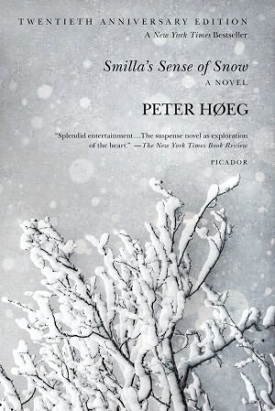 Stieg Larsson and his heavily tattooed Lisbeth opened the floodgates for unusual women characters and an insider's view of Europe. Larsson showed the real Sweden, making us feel as if we had actually walked those neighborhoods and visited the countryside.

But Larsson wasn't the first to make a splash with a contrary, asocial heroine or show us a part of a country even the well-traveled tourist may not have seen.

That would be Danish writer Peter Hoeg and his Smilla's Sense of Snow.

It seems hard to believe that Hoeg's story about his complicated, unlikable heroine celebrates its 20th anniversary.

Smilla's Sense of Snow was one of those books that has stuck with me. I hadn't quite seen such an unusual heroine or been taken to such exotic lands before Hoeg's novel.

The woman with the sense of snow is Smilla Qaavigaaq Jaspersen, a glaciologist living in Copenhagen. For her, the snow and ice are more important than the sun.

The daughter of a wealthy Danish doctor and his first wife, an Inuit hunter, Smilla is a stranger to all. She is uncomforable living among the Danes. She also doesn't fit into the Inuit community due to her dependence on her father's generous checks and her fondness for stylish clothes.

Depressed and alone, Smilla's only friend is her 6-year-old Inuit neighbor, Isaiah, who is neglected by his alcoholic widowed mother.

When Isaiah is found dead, face down in the snow with his footprints on the roof of a neighboring warehouse, Smilla's "sense of snow" kicks in. The snow patterns show, to Smilla, that Isaiah was not alone. But neither the police nor Isaiah's mother seem to care.

Like Lisbeth, Smilla often is discounted by others. "My weapons have always been the small details that no one knows about. My identity, my intentions," Smilla states.

Smilla's investigation of Isaiah's short life leads to his dead father, a thwarted expedition of a Danish mining corporation, and an uninhabited island near Greenland.

In the review I wrote for the Sun-Sentinel, parts of which I have quoted above, I said that Smilla's Sense of Snow "dramatically explores alienation, the loss of identity, cultural diversity, exploitation of the environment, science and the intricacies of love."

More excellent crime fiction is coming out of Europe and I highly recommend The Absent One by Jussi Adler-Olsen (Danish); Midwinter Blood by Mons Kallentoft (Sweden); Frozen Moment by Camilla Ceder (Sweden).

But let's also remember what started it all and Smilla's Sense of Snow.