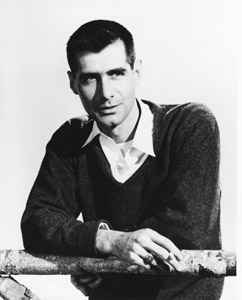 Long before I first met Evan Hunter, he bought me a drink.

I remember it well. It was champagne, Mumm’s Brut, and it was one of half a dozen bottles that he sent to the office at the Scott Meredith Literary Agency. It was Christmas, 1957, and I’d been working there since a bemused fellow at Qualified Employment sent me over in August to take a blind test.

The test consisted of reading a story (“Rattlesnake Cave”) and writing a letter to its author (“Ray D. Lester”). One could tell the author the story was fine, or suggest revisions, or explain why it stank. Ray D. Lester was in fact the science fiction writer Lester Del Rey, and he’d written the story to Scott’s order, striving to encompass every plotting flaw he could think of. I pointed them out in my letter, and got the job, which consisted in doing essentially the same thing 40 hours a week, with other stories that were every bit as bad as “Rattlesnake Cave,” but not by design.

They hired me in spite of both my youth—I had just turned 19—and the fact that I’d be going back to Antioch College on the first of October. They didn’t know that part, and I figured I’d cross that bridge when I came to it, but after two months I burned it instead and told the college I wouldn’t be coming back after all. It was the best job in the world for me, and I could write a whole column about the place, and will, but this one is about Evan Hunter.

Our office was on the 18th floor at 580 Fifth Avenue. A couple of years later Scott moved to more spacious quarters on the seventh floor, but on 18 there were just six of us hirelings in the outer office, and everybody got a bottle. Champagne bottles come in a great variety of sizes, and each size has a name all its own. There are Magnums and Jeroboams and Methuselah and Nebuchadnezzars, and don’t they sound grand? There is also the split, which contains just enough champagne to fill two glasses, and that’s what each of us got, and I couldn’t have been happier.

I saved it for New Year’s Eve. A date and I could each have had a glass, but I didn’t have a date, so I drank the whole bottle.

I read The Blackboard Jungle in high school, probably within a year of its 1954 publication. I was reading a rich diet of Steinbeck and Wolfe and Farrell and O’Hara, and I can’t say Evan’s novel blew me away. I thought it was okay, certainly, but it didn’t make me kneel in homage.

My next contact with the man, albeit from a distance, was when my dad brought home a copy of Writer’s Yearbook. Scott Meredith had contributed a self–serving article, explaining just how much money Evan had made from Jungle, how he’d sold film rights in advance of publication, and all the other great deals he had made on his author’s behalf. I think the total sum ran to $100,000.

That impressed me, but I can’t say it made me salivate. I knew by then that I was going to be a writer, that I’d somehow produce books and stories, and that I’d somehow make a living doing this.

Then, some months later, I bought a paperback at a drugstore. It was The Jungle Kids, a collection of stories Evan had originally published in magazines, mostly Manhunt. They all had youthful protagonists, and they’d been collected to cash in on the success of the novel. 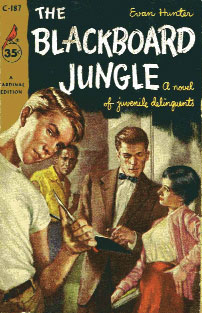 I thought they were terrific. And I had a solid experience of identification—not with the juvie characters, but with the author himself. Because the two things that struck me about what I was reading were: (a) that these were genuinely good, and (b) that I could see myself writing them.

And I immediately got an idea for a similar story, and sat down and tried to write it. It was terrible, and died a few pages in, and I threw it out and forgot about it.

But when I sold my first story, it was to Manhunt. When I got a job good enough to quit school for, it was where Evan started; he’d gone to work for Scott when the office was even smaller, and had been good enough at it that the Meredith brothers had talked about making him a partner. Instead, he’d done well enough writing to devote himself to it full–time, and when I started there he was the agency’s star client—which is why noblesse oblige led him to send some champers to the wage slaves.

Do you think I minded that I didn’t have a date? Or that two sips of Mumm’s don’t make New Year’s Eve any more than two swallows make a summer? What, are you kidding? Evan Hunter bought me champagne!