Books
In Search of Mercy 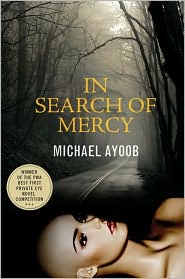 Over the years, the St. Martin’s Press/Private Eye Writers of America Best First Private Eye Novel Contest has proven to be a wonderful spotting ground for new talent in the genre—particularly if their first name is Michael. Joining Michaels Kronenwetter, Wiley, Koryta, and Siverling is Pittsburgh scribe Michael Ayoob, whose winning contribution, In Search of Mercy, may just be the best one yet—and certainly one of the most original.

Former star high school goalie Dexter Bolzjak is a real nowhere man, an empty shell still trying to make some sense out of a life shattered by his traumatic assault and sexual humiliation by a gang of sports fans. Definitely not your typical PI background. But then, Dexter isn’t really a private eye at all. At the ripe old age of 25, he’s not exactly setting the world on fire: He’s a sorter (onions are his specialty) at a Pittsburgh fruit and vegetable warehouse; he sleeps in a cot in the curtained off corner of a friend’s mom’s basement; and he’s estranged from both of his divorced parents. No prospects, no girlfriend, nothing. Then Lou Kashon, an aging, sickly alcoholic, makes him an offer he can’t refuse—find out what happened to Mercy Carnahan, a reclusive film noir star who disappeared more than 40 years ago. Tempted by the dying Lou’s dresser drawer full of money, and realizing he can’t live in a basement forever, Dexter agrees, unaware that there’s more to the actress’ disappearance than originally suspected—or that in the age of online streaming video, the past is never really over.

The rundown, rusted glory of a dying steel town is the perfect backdrop for this surprisingly moving tale of broken dreams and broken lives, pain and healing, and ultimately, desperation and courage. More, please.