Books
Our Kind of Traitor 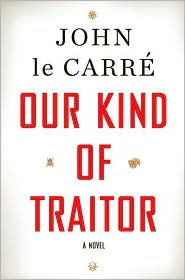 When disaffected Oxford scholar Perry Makepiece and his longtime girlfriend, Gail, an up-and-coming barrister, meet an extraordinary Russian named Dima and his eccentric family while on vacation, the last thing they expect is to be asked to help him defect. Apparently, Dima is the world’s foremost money launderer. Thus, his defection puts him and his family at risk from the Russian mob. Perry is scared, but intrigued enough to set aside his concerns and step up to a challenge he thinks will stretch his capabilities beyond the merely academic. Although Gail is even warier, she’s ultimately moved to help in order to protect Dima’s children, especially his shy and vulnerable eldest daughter. They end up arranging for Dima and family to relocate to England, in exchange for information Dima will provide the government in a deal brokered by Hector Meredith, a rather loose cannon of a British intelligence officer, and executed with help from Perry, Gail, and Hector’s assistants.

Featuring an elaborately structured, smooth as silk narrative along with well-drawn and colorful characters, the story builds steadily in power and intensity. The escalating tension, breathtaking pace, and increasingly nagging undercurrent that something is, indeed, very wrong with this picture are tempered with the driest of British wit.

John le Carré’s background with British intelligence, as always, serves him well in creating the plot’s spy-versus-spy scenarios, which play out to an unsettling resolution. Le Carré isn’t resting on his stellar literary track record here, he’s still very much the master of the spy thriller genre. The protagonists of Our Kind of Traitor learn a hard lesson in the way only le Carré can deliver it.

The long-awaited espionage novel from a master of the genre does not disappoint.