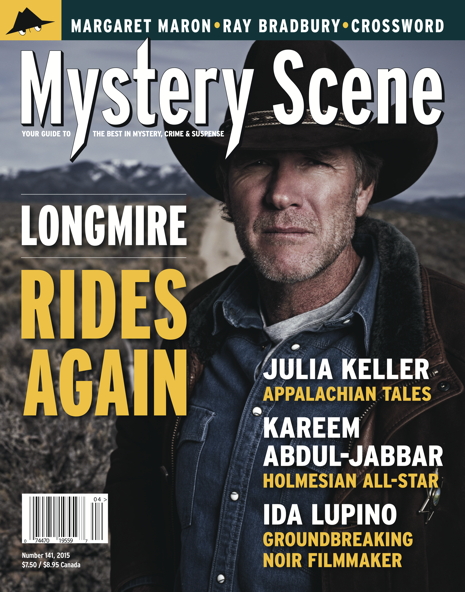 Craig Johnson, the author of the Sheriff Walt Longmire novels about a laconic Wyoming lawman, is attracting the fame and the fans that come with a string of bestselling novels and a hit TV show. There’s even a Longmire Days fan festival.
by Michael Mallory

Death is a Lonely Business: The Mysteries of Ray Bradbury

Surprisingly, the celebrated author of The Martian Chronicles and Dandelion Wine began his career in crime pulps and went on to write several well-received mystery novels.
by Michael Mallory

The horrific 1972 Buffalo Creek Disaster, caused by a mining company, was the inspiration for Keller’s latest Bell Elkins novel.
by Oline H. Cogdill

The Dark Vision of Ida Lupino

Director, producer, screenwriter, star—Lupino was one of the most versatile and influential talents in film noir.
by Jake Hinkson

A chat with Margaret Maron, author of the Deborah Knott mysteries.
by Ed Gorman

Long Upon the Land: A Review

But That’s Another Story
by Art Taylor

How to Haunt a House
by Leigh Perry