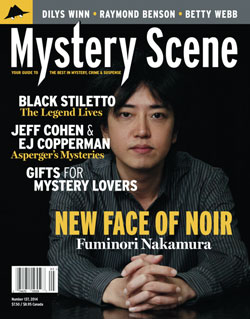 The Question of the Collaborating Crime Writers

E.J. Copperman and Jeff Cohen team up to write a new series featuring a detective with Asperger’s syndrome.
by Cheryl Solimini

Even though he never took it, a “Mystery Readers’ Tour of Britain” led by the celebrated bookseller started a young boy on the journey of a lifetime.
by Joseph Goodrich

Roy Huggins: Too Late for Tears

TV titan Roy Huggins, creator of The Rockford Files, The Fugitive, etc., also had one film noir masterpiece to his credit, the newly restored Too Late for Tears.
by Jake Hinkson

Books, DVDs, jewelry, mugs and more for all the good little mystery fans on your list.
by Kevin Burton Smith

“Down These Mean Streets” Crossword

The Bulletin Board and the Writer
by Betty Webb