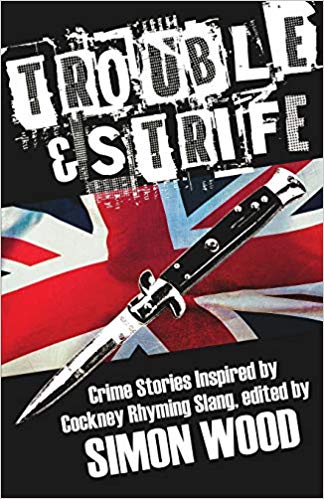 Trouble & Strife, edited by Simon Wood, is a clever (and very good) themed anthology using Cockney rhyming slang as inspiration for its 11 original crime tales. As Wood explains in his introduction, Cockney rhyming slang is when a word, such as “wife,” is replaced with a rhyming word, such as “strife,” and another word is added to turn it into a phrase. In this case, “trouble” is added to form the phrase “trouble and strife,” and for the hardcore rhymers, the rhyming word is dropped and “trouble” is ironically substituted for wife.

The stories tend towards hardboiled crime with a few close to straight and ironic noir. “Dicky Dirt” by Johnny Shaw, inspired by the rhyme for shirt, is a pleasingly ironic revenge tale about a petty criminal and a former schoolmate with a grudge. It reminds us that sometimes bad things do happen to bad people. Steve Brewer’s “Babbling Brook,” inspired by the rhyme for crook, is a violent prison story about a felon who talks too much and his annoyed cellmate. “Pleasure and Pain” by Robert Dugoni, inspired by the rhyme for rain, is a nice mixture of a gothic mystery and an old episode of the television series Alfred Hitchcock Presents. Its ending is both surprising and satisfying.