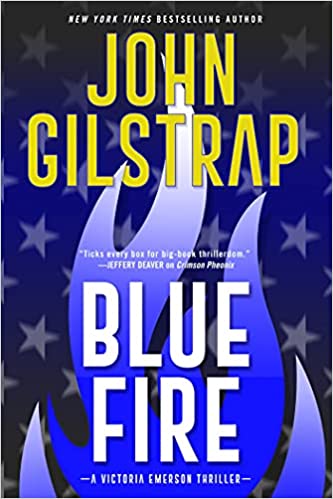 Author John Gilstrap unleashed a nuclear holocaust last year in Crimson Phoenix, the first book in his Victoria Emerson thriller series. No, he really did!

In Blue Fire, the second book in the series, life has been reduced to the metaphorical Stone Age and those few people who survived the events of “Hell Day” are trying to hardscrabble their way through their new lives. It is against this post-apocalyptic backdrop that former congresswoman Victoria Emerson, the mother of three sons, has found herself the leader of Ortho, West Virginia. Along with her two Army escorts, she’s now in charge of the town. But as more and more people show up, she is finding the town’s already limited resources being stretched thin.

With the government and the military having fallen, it is everyone for themselves and outsiders are looked upon with deep suspicion. You’ve got to provide a service or you are out of luck. This new brutal but necessary life is threatened when remnants of the Army show up in Ortho with the intention of taking whatever they want from the town. But the town fights them off, setting up a battle of wills (and bullets) to come.

If their new growing community is to survive, the people of Ortho are going to have to make hard choices or be overrun by those who are only too willing to kill for what they have. And then there is the matter of her third son, whom she’s been looking for ever since Hell Day. But can she and her family abandon the town to find him when Ortho’s moment of need is greatest? When the bullets start flying, will the people who have never had to fight for their survival stand or run? Whom can Victoria trust? And will an unexpected new arrival to town throw Victoria into a choice between her family and her new job?

Victoria is a captivating character. She has a pretty clearly defined idea of how to start rebuilding some semblance of life for her, her family, and those people now counting on her. But implementing that vision requires great sacrifice. Not knowing what happened to her missing son haunts her, but she can’t leave Ortho unprotected. When the situation requires ruthlessness, watching her struggle with making the right decisions without losing her humanity makes for interesting reading.

The world that John Gilstrap is building in this series is a harsh one. Blue Fire looks at how things are and imagines the varying reactions people have to their “new normal.” I’m not sure if his depictions of the surviving government reflect his own personal views or are just by design for this story, but I can’t say that they seem all that far-fetched considering the world we live in. The events occurring in Blue Fire show the best and worst of humanity when confronted with the biggest of challenges.

The only real drawback for me was how the story bounced back and forth between the post- and pre-Hell Day timelines. Though Gilstrap is careful to note the time frame at the start of each chapter, I would’ve preferred a more linear timeline throughout.

There’s plenty of action with firefights and bodies galore. As for the supporting cast of characters, there’s plenty of meat on the bone there as well. Victoria’s sons, Luke and Caleb, are adjusting to their new lives with varying degrees of success. I particularly like Army Major Joe McCrea. He was Emerson’s escort before the world ended and now after having lost everything, he’s her trusted second-in-command. I admire his commitment to duty without it coming off as overly jingoistic.

In most stories where the world is pushed to the precipice, the day is saved at the last moment and things go back to normal. Blue Fire goes in the opposite direction. The world loses it all and now must rebuild through fire and blood. The complex characters, their decisions, and the results of those decisions make for one heck of a compelling narrative that will thrill readers from start to finish.