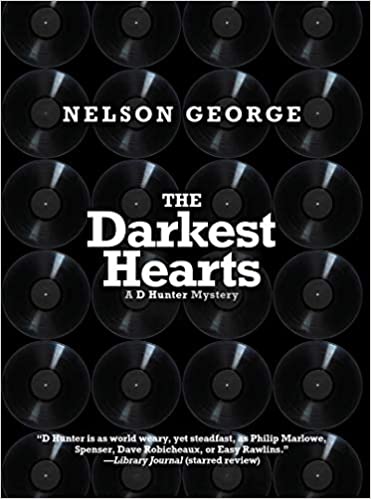 Nelson George’s The Darkest Hearts—his fifth D. Hunter mystery, after 2017’s To Funk and Die in LA—takes the African-American bodyguard turned talent manager to Atlanta, center of 21st century hip-hop and home to rising trap star Lil Daye. D is negotiating with billionaire Samuel Kurtz to secure a liquor endorsement deal for Lil Daye when he receives a blackmail threat from the artist’s mistress, Dorita. If D doesn’t give her $150,000, Dorita will tell the world that Lil Daye is cheating on his Instagram-famous wife and made Dorita abort his child. When D broaches the topic with Lil Daye, the young MC orders D to let him handle the situation “in an ATL way”—an instruction that makes D profoundly uncomfortable, particularly when Dorita then disappears. To ease his conscience, D asks Serene Powers—a fierce female vigilante and aspiring MMA fighter—to find the missing girl. Further complicating matters is a phone call from former gangbanging hit man Ice, who tells D that a body found off a Brooklyn pier links the two of them to the death of ex-FBI agent Eric Mayer. George’s passion for, and encyclopedic knowledge of, hip-hop suffuses every word of this smart, stylish novel. Although the author deftly deals with issues of predatory capitalism, government corruption, and the senseless murder of black men by America’s cops, it’s his handling of the tale’s sex trafficking and #MeToo subplots that deserves special acclaim. Forcing D to reflect on what he’s willing to overlook in the name of friendship and fame enriches the plot and adds dimension to an already nuanced character. George incorporates a decent amount of backstory for readers unfamiliar with his series and its setting, but interested newbies may want to buy book one, The Accidental Hunter, and embark on a binge.