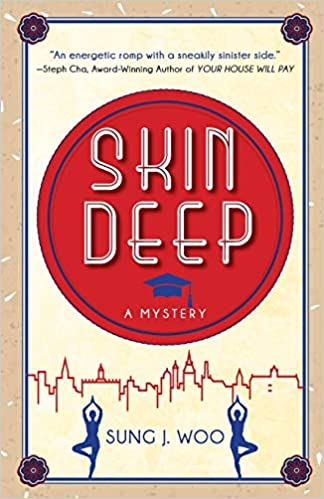 First in a promising new series, Sung J. Woo’s Skin Deep introduces Siobhan O’Brien—a 40-year-old Korean American adopted in infancy by an Irish father and a Nordic mother. For the past two years, the laid-off newspaper reporter has been apprenticing under Ed Baker, a private detective in the upstate New York town of Athena. Now that she finally has her PI license, Siobhan is eager to assume more professional responsibility—but when Ed dies of a heart attack and bequeaths her the agency, she suffers a crisis of confidence. Siobhan strongly considers liquidating the business’s meager assets and starting over, but then her dead best friend’s little sister, Josie Sykes, shows up at the office. Two weeks ago, the dean of Llewellyn—a formerly single-sex liberal arts college in nearby Selene, New York—called to advise Josie that her adopted 18-year-old daughter, Penelope Hae Jun Sykes, was taking a leave of absence. Josie has since been unable to contact Penny, and is deeply concerned for her welfare—especially given that the girl has a serious medical condition. Siobhan agrees to assist, enrolling as a continuing education student at Llewellyn to provide cover. Her investigation reveals a newly coed campus full of furious feminists, a suspiciously robust police presence, and a tight-lipped college president who has ties to a yoga retreat with cult-like roots. A diverse cast replete with vividly sketched characters—the majority of them female—elevate this fun take on the classic PI novel. Siobhan is a snarky, smart, and refreshingly relatable narrator whose burgeoning romance with a widowed lawyer adds to the tale’s emotional complexity without detracting from its central puzzle. Snappy dialogue complements the breezy plot, which, like Siobhan, never takes itself too seriously. Kinsey Millhone fans, this one’s for you.