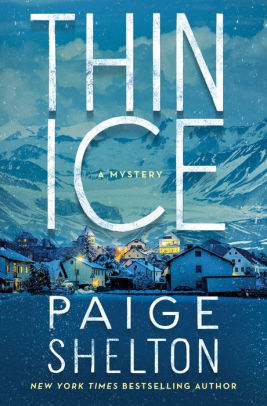 In Paige Shelton’s new thriller,  Beth Rivers is on the run. Her  career as a bestselling thriller  author was put on hold after being kidnapped by a crazed stalker  named Levi Brooks. She managed  to escape his clutches, but in doing  so, she is left with scars both seen  and unseen. Beth has traveled in  secret to the remote Alaskan  wilderness and settled in Benedict.  It’s a town pretty much accessible  only by plane or boat and with  just a few hundred people and  little contact with the outside world. Beth figures it is a perfect place to hide while she waits for the police to track down her kidnapper.

Things don’t get off to a great start for her, though. Beth’s managed to book herself a room in a halfway house, so the townspeople initially think she is a criminal on parole. And while the local police chief knows who she really is, the locals aren’t quite sure why she’s hanging around. Slowly, Beth begins to settle in, taking up the job of publishing the previously defunct local newspaper and tentatively beginning to make some friends. But when one of the townspeople kills herself and the chief isn’t convinced it’s a suicide, Beth is worried that Brooks has somehow tracked her down.

In her younger days, Beth helped her police chief grandfather with cases, and the local chief asks her for her take on the death. Once she starts to look into things, clues don’t add up, and soon Beth finds hidden truths as harsh as the brutal Alaskan environment. Plus, she is still dealing with nightmares as pieces of her time in captivity come back to her.

While Shelton is known for her cozy Scottish Bookshop mysteries, this first in a new series is a straight-up thriller. The vagaries of life in a small, isolated town are richly explored as the investigation moves through its various suspects. Deeply traumatized and scarred by her harrowing experience, Beth Rivers is perfectly cast as someone deeply afraid yet determined to get back at least a measure of who she once was. The Benedict townspeople are a gruff, hardy lot, but you can see that they will be able to be counted upon if the need arises. What really makes this a book for me is how Shelton shakes up the status quo multiple times in the story, eschewing the easy narrative path. This makes Thin Ice one of the more unexpectedly captivating books I’ve read all year, and readers will come to find themselves eagerly anticipating what Paige Shelton has in store for them next.