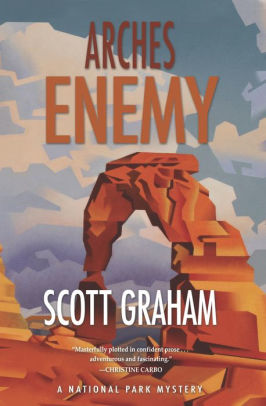 The oil and gas industry is juxtaposed against the beauty of nature in Scott Graham’s Arches Enemy, set in Moab County in southern Utah. As a huge seismic truck thumps its way across the landscape, seeking oil and gas deposits, one of the area’s most exquisite stone arches collapses. A runner, illegally crossing the arch in search of a spiritual high, is crushed to death. The collapse is heard by archeologist Chuck Bender, who is working a cave near the Devil’s Garden trailhead. When he rushes to the site, he finds the runner—a young woman named Megan Johnson—beyond help. She has been crushed by several tons of falling rock. The first suspect is the seismic “thumper” truck, which some locals believe caused the collapse, but as Bender examines the debris more closely, he finds a drill hole in one rock. Surrounding the drill hole are the remains of an explosive compound. At that point, Megan’s death is suspected to be a homicide, not just a sad accident. Then others start dying, and by the last page, three more people are dead. Author Graham’s personal love of the magnificent Moab area is evident in his gorgeous descriptions. And most of his characters are likable, as nature lovers tend to be. But not all. The worst is Bender’s own mother, a manipulative monster with a talent for inserting herself into her son’s life at the worst possible moments. After a disreputable past, she now declares herself “spiritually enlightened,” and is ready to use her powers to help others achieve the same heady state. But for a price, of course. Arch Enemy is a fascinating book, especially when Graham discusses the conflict between beauty and greed. However, some readers may find the ending problematic given the seriousness of the book’s subject.