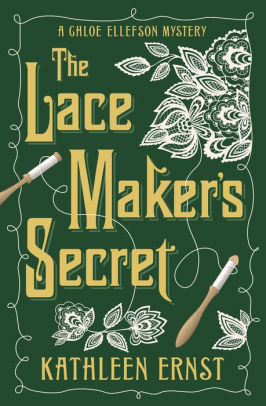 A consulting job for the restoration of a Belgian-American farmhouse in Green Bay Heritage Hill State Historical Park is a welcome distraction for Old World Wisconsin museum curator Chloe Ellefson, who, in her ninth series outing, has just learned some disturbing personal news. Chloe is also happy to be reconnecting with an old friend, an antique Belgian lace expert who is also working at the site. But before Chloe even reaches her destination, she makes the gruesome discovery of a body in an abandoned outdoor brick oven. When other strange things start happening, she wonders if they all aren’t connected. If that’s not enough, her longtime boyfriend Roelke McKenna is hiding something from her. But she can only solve one mystery at a time.

The Lacemaker’s Secret is a gem, a blast from the past, and a cozy with a kick. Unfolding over dual timelines—1983 (the series’ “present”) and the mid-19th century through WWI (through the story of a Belgian-American immigrant woman)—it marvelously melds mystery and early Belgian-American history. The attention to detail that Ernst puts into her historical research is impeccable and the author presents a realistic taste of the unimaginable struggles of the early Belgian settlers to Wisconsin.

The multifaceted characters are all memorable and well developed, but it’s the series’ star, Chloe, and Roelke, her cop beau, who stand out. The multiple story lines are decidedly demarked, tightly plotted, and picturesquely painted. The even pace, superb writing, plus a few surprises and a didn’t-see-it-coming ending keep the pages turning.

Like all series, The Lacemaker’s Secret is best read in order, but with the ample backstory included it stands on its own. Fans of the cozy genre, and especially lovers of US history, will admire Ernst’s protagonists and surely adore this particular story rich in Belgian culture.