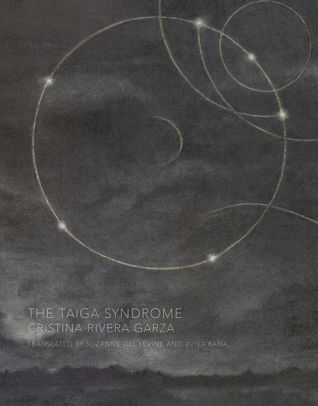 If Paul Auster (The New York Trilogy) and Angela Carter (The Bloody Chamber) had a fictional child with the poetic vision of Anne Sexton (Transformations) it would be Cristina Rivera Garza’s remarkable, metaphysical detective novel, The Taiga Syndrome.

Aside from Earth’s oceans, the Taiga, a subarctic snow forest of birch, firs, and cedars, is the largest biome community on the planet. What if Hansel and Gretel met the Big Bad Wolf in those deep, dark woods?

That’s the existential premise of Garza’s fairy-tale-inspired search that blurs the boundaries of reality and fantasy, and it is where the unnamed detective narrator finds herself when she takes on the riddle of “the case of the mad couple of the Taiga.” In the story told over 22 brief (some as short as two pages), evocative chapters, the detective is hired by a man to find his second wife, who has run off with another man.

Her search begins when the detective, accompanied by a translator guide, wanders into the couple’s village, where she discovers a feral boy child outside their shack. Or is he a wolf? What follows are references to François Truffaut’s 1970 film L’Enfant Sauvage (a “peculiar romance ...established between the feral child...and the spectator”), as well as nods to “Little Red Riding Hood” and the aforementioned “Hansel and Gretel.”

The novel takes its title from an alleged disease that strikes the inhabitants of the Taiga, causing one to “suffer terrible anxiety attacks and make suicidal attempts to escape.” As the detective and the translator follow the crumbs of their investigation deeper into the Taiga, they find themselves in an alternate, surreal cosmos. Before the narrator’s trek into the tundra is over, readers will wonder if she, too, won’t succumb to The Taiga Syndrome’s fevered dream.

The Taiga Syndrome is a stunning philosophical meditation that transcends the standard detective story. As Rivera Garza writes, this is a “story about being in love,” admittedly a very strange love, as well as falling out of it. It is a postmodern fable as if written by Mary Shelley and The Brothers Grimm. It is an extraordinary novel that will get under your skin and make it crawl.