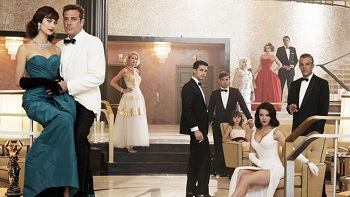 It's 1959 and Miami is truly the "Magic City," shimmering and glittering with a sleek new hotel rising out of the sand, signaling a rebirth that will continue to evolve for the next 50 years and beyond.

Sleek cars, beautiful fashions and a sense of expectations bring celebrities, politicians and mobsters to Miami. This insular world is about to go global in ways it could never imagine. Revolutionaries in Cuba, a burgeoning drug traffic from South America and culture clashes will permanently change the landscape of South Florida.

Miami is about to become a major player; it just doesn't know it yet.

Magic City, the sleek, highly watchable series on Starz Network, captures the attitude and atmosphere of Miami in 1959.

Although the series just started, Magic City already has been renewed for a second series. Magic City airs at 10 pm Fridays on Starz, with frequent encores. The first three episodes, and several short looks at the times, fashion and the building of the set, also are On Demand.

Magic City's plot and setting are reminiscent of The Sopranos, The Godfather and, for style alone, Mad Men. 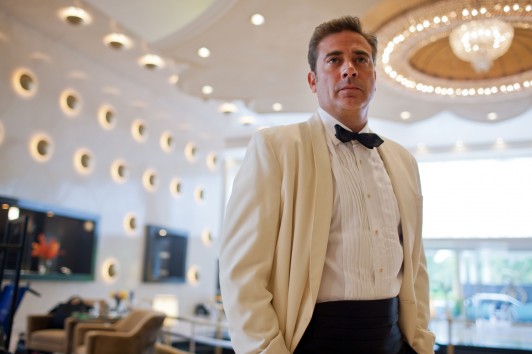 Ike Evans (Jeffrey Dean Morgan, Grey's Anatomy) is a good man, devoted to his three children and his lovely second wife, Vera (Olga Kurylenko) and to his glamorous the Miramar Playa hotel.

He's got Frank Sinatra booked for his New Year's Eve program to usher in 1959.

Ike also has major financial problems and a union strike that threatens everything he has worked for. Ike will do just about anything to save his sacred Miramar, which was built with his much-loved first wife's money and blessing.

For this, Ike will sell his soul as he gets in league with the devil, in this case mobster Ben "The Butcher" Diamond (a deliciously evil Danny Huston). (For trivia fans, Danny Huston is the son of John Huston.)

Diamond already secretly owns half of Miramar, but he wants all of it.

Ike may be reluctant to ask for Diamond's help, and he certainly is haunted by the "choices" the mobster makes. But that doesn't stop Ike. He can live with the sleepless nights and the nightmares.

Ike fools himself into believing that the Miramar is an homage to his late wife, the mother of his children and the great love of his life. Ike also believes that the Miramar will be the legacy he leaves to his three children—the promiscuous son Stevie (Steven Strait), the level-headed Danny (Christian Cooke), and 12-year-old Lauren (Taylor Blackwell).

One can pretty much guess what will happen to the arrogant union leader and anyone else who threatens the Miramar's survival and gets in the way of Ike or Diamond. Domestic scenes and the glamorous life at the Miramar frequently cut to more gruesome scenes, much like the baptismal scene in Godfather II.

What makes Magic City so entertaining and so watchable are the constant personal and international dramas circling the Miramar. Dec. 31, 1958, also is the date that the government of Fulgencio Batista crumbles as Castro and his troops march toward Havana.

Sinatra's glorious voice is filling the showroom of the Miramar. But inside the kitchen the general manager Victor (Yul Vazquez) tries to keep the mostly Latin kitchen staff away from the radio news while, at the same time, worrying about his wife who is still in Cuba. Victor also does his best to be strong for his daughter, Mercedes (the charming Dominik Garcia-Lorido, daughter of actor Andy Garcia), who works as a maid at the Miramar and is dating Ike's son, Danny.

Stevie, meanwhile, has started an intense affair with Lily Diamond (Jessica Marais), the third wife of the venegeful Diamond.

Stevie and Lily first meet in a black hotel in Overtown. Note to Lily: A man whose nickname is "the Butcher" and whose first two wives died during childbirth while he watched and who is not above doing the unforgivable in the second epsiode is not good husband material; he also is not someone who will lightly take cheating on him.

It's also intriguing that Ike and his family are Jewish, at a time when anti-Semitism was still rampant on Miami Beach, even while the area had more than its share of Jewish mobsters, with whom Ike's father Arthur (Alex Rocco, The Godfather) is more than a little familiar. In one scene at a club that does not normally admit Jews, a waiter won't even look at or acknowledge Ike.

Magic City's creator Mitch Glazer has done well by his hometown, bringing authenticity and rich details of the era to each scene. The show mentions certain South Florida landmarks that only a native would remember.Glazer grew up on Miami Beach during the late 1950s and his father designed the lighting for such luxury hotels as the Fontainebleau, the Deauville, and Eden Roc.