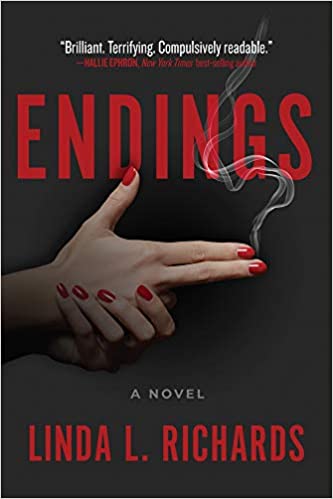 After a fire claims the lives of her husband and nine-year-old son, the unnamed narrator of Linda L. Richards’ Endings does what any broke, grief-stricken suburbanite would do: she walks away from her house and career, assumes a new identity, and becomes a hit woman. Not only is the money good, but murdering people gives her purpose, at least in short bursts.

She largely avoids the news, given her tragic past and chosen path, but then one day while in line at the butcher she hears a report about a serial killer who preys on young children. Authorities strongly suspect William Atwater—a 27-year-old from San Pasado County, California, who routinely posts pictures of the victims to his Facebook page. Thus far, Atwater has remained one step ahead of those hunting him, but after learning of his depravity, the narrator doesn’t intend for that to remain the case much longer.

This action-packed, adrenaline-fueled thriller from Richards breathes new life into a genre dominated by brooding male protagonists. The main character may be damaged and the subject matter dark, but the dry, witty tone coupled with the plot’s introspective bent and hopeful conclusion keeps the tale from skewing too bleak. By declining to name the narrator, giving her a prosaic origin story, and writing in the first-person, Richards grounds the tale and suggests to readers that with a cruel twist of fate, this story could be theirs.

This stellar standalone is sure to win Richards legions of new fans.