Nonfiction
Sara Paretsky: A Companion to the Mystery Fiction 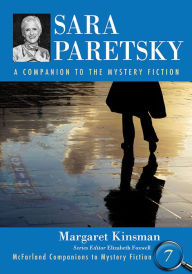 Typically of the distinguished series to which it belongs, this book does an excellent job of identifying characters, locales, themes, and other allusions; summarizing novels and stories and their critical reception; and providing biography, bibliography, and chronology of a significant contributor to crime fiction. The mild caveats that follow do not contradict that in any way.

A common pitfall in the course of celebrating a particular author is the tendency to exaggerate the subject’s importance by denigrating the genre to which she belongs. This book inaccurately stereotypes hardboiled private-eye fiction pre-Paretsky to make her stand out. This is not necessary. Paretsky’s record as writer and social activist doesn’t require artificial propping up.

An article on “Hard-Boiled Subgenre” refers to “trigger-happy detectives such as Race Williams, Philip Marlowe, and the Continental Op” who “dominated the hard-boiled subgenre.” Were these characters trigger-happy? Race Williams, maybe; the Continental Op, in the late stages of Red Harvest perhaps, but it bothered him; certainly not Marlowe. If this characterization were accurate, would Paretsky have enjoyed their works and wanted to write in their tradition? And was Paretsky’s selection of Chicago as a locale rather than “more traditional literary and film settings” New York, Los Angeles, or San Francisco really so risky and did her use of it “put Chicago on the pop-culture literary map”? Had the author of this article never heard of Craig Rice, Thomas B. Dewey, John Evans (Howard Browne), Fredric Brown, or Jonathan Latimer, all of whom set their novels in Chicago? The difficulty of selling Paretsky’s first book probably had more to do with resistance to a female private eye than to one of America’s greatest cities.