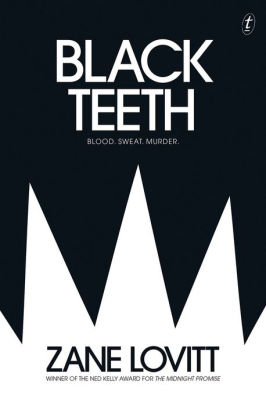 Black Teeth is Australian crime writer Zane Lovitt’s impressive second novel after The Midnight Promise (2012). A remarkable mixture of noir and psychological thriller, it chronicles a socially isolated and fearful young man, Jason Ginaff. Jason earns his living performing online background checks using both legal and extralegal methods for companies hiring new employees. He finds those embarrassing photographs taken at drunken parties, awkward statements composed in an irrational moment, and anything else that may compromise the job candidate. His life is comfortable, but silent and empty until a computer program he wrote uncovers the telephone number of the man Jason believes is his father.

The discovery of his father, a former Melbourne police detective named Glen Tyan, leads Jason to the story of a decade-old murder. Cheryl Alamein was murdered in her home and her husband, Piers, was convicted of the crime. Piers spent ten hard years in jail before killing himself, and his son, Rudy, who has always believed in his father’s innocence, gets the same tattoo his father received in prison: a black jagged set of teeth on the skin between the thumb and forefinger. It is a symbol that identifies the wearer as the property of a prison gang. The only thing left for Rudy is to avenge his father, and Glen Tyan is the target.

Black Teeth is twisted, absorbing, at times ugly, dark, and always intriguing. An examination of identity—Jason Ginaff’s, specifically, but others also—with characters that are varying shades of nasty: a burned-out and psychopathic retired cop, a scammer with a frightening ability to see the angles and rationalize her own best interests, a hopeless and defeated Rudy Alamein, and Ginaff—impotent, lonely, and scared. It is a walk down the same twisted and dark streets Jim Thompson showed us 70 years ago with classics such as The Killer Inside Me and Savage Night, but with all the modern trappings we now use to bury our fear and conceal our humanity.