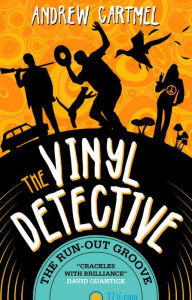 The unnamed hero of Andrew Cartmel’s series lives a relatively sedate life in London with his girlfriend, Nevada, and their two cats while tracking down rare vinyl albums for collectors.

When he is approached to track down the truth behind the death of a ’60s rock singer named Valerian and what happened to her kidnapped child, he’s initially not interested because he’s not “that” kind of detective. But the allure of tracking down an exceedingly rare 45 single from her band gets him to take the case. When people he contacts for information begin to die after speaking to him, things take a more sinister turn, and soon he, Nevada, and their friends Tinkler and Clean Head find themselves targeted as well. Someone doesn’t want whatever the truth might be to come out.

Cartmel’s story set in the niche world of vintage and music enthusiasts has quite the air of authenticity and an audacious sense of humor. Readers will feel as if they are observing real (if a bit odd) people in their everyday lives and can’t help but develop a bond with them. While the attempts on the lives of the characters ratchet up the intensity, the danger fits with the overall feel of the book, never serving simply as a setup for the big-action set pieces. In fact, the only false note to this book was a reveal in the epilogue that felt like it was cribbed from almost every kidnap story I’ve ever read.

You'll enjoy The Run-Out Groove whether you have an abiding love for vinyl records or not. The book hooks you fast for an intriguing ride that will only serve to whet your appetite for more books in this series.