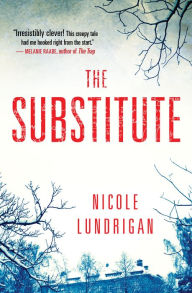 The Substitute, the sixth novel from Canadian writer Nicole Lundrigan, is a captivating psychological thriller that balances secrets and lies with identity and family. Warren Botts is a weary research scientist who finds solitude and a paycheck working as a substitute middle-school science teacher. When one of his students, Amanda Fuller, is found hanging from a tree in the backyard of Warren’s rented home, many of the townspeople blame Warren for her apparent suicide.

Amanda and Warren have a short and mildly inappropriate history. Amanda, who struggled in her science class and with nearly everything else since her father abandoned her and her mother, used to approach Warren outside the classroom, including at his home. Warren’s brilliant mind is shackled by guilt, cowardice, and self-doubt. Frightened of the implications of any perceived abnormal teacher-student interactions, Warren lies to the investigating detective about his relationship with Amanda, which only increases suspicion about Warren’s role in Amanda’s death.

The story is split between Warren, written in the third person, and a young, unknown observer recounting events in the first person. It soon becomes obvious that the anonymous second narrator is a cold and calculating psychopath. The narratives are wholly separate, but are woven together to form a complex picture of Amanda’s death and Warren’s life, each narration acting as a foil to the other as the “truth” unfolds—the knowing, planned actions of the psychopath and Warren’s suffocating angst, haphazard and often bizarre behavior. The psychopath’s identity is nicely hidden until the book’s final pages, and the final twist, revealing all, is as satisfying as everything else about The Substitute.