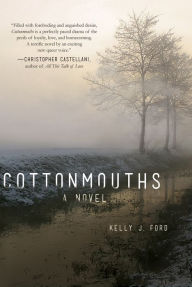 Emily Skinner thought she’d left the aptly named Drear’s Bluff, Arkansas, behind when she went away to college in Little Rock. But when she drops out after two years, rattled by a failed love affair, she finds herself back in the small farming town ruled by gossip and born-again Christianity, saddled with student loan debt and unable to find a decent job. Her high school best friend—and secret crush—the beautiful and unpredictable Jody, is back too, living on the family farm with her fatherless baby. The teenage Troy, his football promise ended prematurely by an injury, crashes on Jody’s couch more often than not. Down on her luck, and down on herself, Emily is persuaded to take a job as live-in babysitter while Jody ostensibly works odd hours at a factory. It seems better than living at home with her judgmental and disappointed parents.

As Emily struggles with her still-overwhelming desire for the manipulative Jody, she finds disturbing hints that all is not what it seems to be. There’s a meth lab hidden in the chicken house, and Emily suspects that Jody may be dealing drugs, although she denies it. Emily tries to tell herself that she can remain separate from the suspicious activities of Troy and his partner August, but when the meth business turns dangerous, she finds her choices have horrifying consequences.

Cottonmouths paints a disturbing picture of deep darkness lurking just below the surface of small-town America. The tension between Emily’s guilt and shame over her failures and her “sinful” desires, and her wishful hopes that everything will turn out all right—if only Jody can be trusted—builds slowly but steadily. The drama reaches its climax when Jody reveals just how far she will go to save herself, and Emily realizes the final, difficult choice she must make.