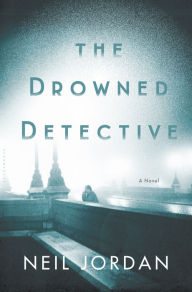 Acclaimed filmmaker Neil Jordan (The Crying Game, Interview With the Vampire, etc.) began his career as a short-story writer and novelist, and it shows. Packed with evocative, almost cinematic visual cues, The Drowned Detective is a murky, haunting tale, shrouded in the shadows of noir.

Jonathan (no last name) is a former British intelligence agent (no specifics given), quiet and methodical, now running a small detective agency in a gloomy, unnamed “post-Gorbachev wasteland” somewhere in Eastern Europe. Jonathan specializes in tracking down counterfeit Gucci handbags and missing persons.

Much is deliberately left unclear. Questions lie unanswered, and truths unexpressed. Misunderstandings abound. Even the quotations marks are missing, leaving the reader to decide whether first person narrator Jonathan is speaking or thinking to himself.

What is certain is that Jonathan is drowning. Paranoid and suspicious by temperament and profession, he’s lost in a city whose language he still struggles with. Sarah, his sensitive and dissatisfied wife, is an archeologist working on a controversial local dig. And caught between them is their lonely young daughter, Jenny, who has filled the widening marital gap between her parents with a slew of imaginary friends.

Jonathan’s family are not the only ones up to their necks in heartbreak and confusion. There’s the aging couple who have hired Jonathan to find their daughter, lost for nearly 20 years—a cold case that weighs heavily on the detective, far heavier than it should. There’s the cynical and acerbic psychic, Gertrude, an aging beauty and self-confessed charlatan who professes to speak to the deceased. There is Jonathan and Sarah’s ineffectual marriage therapist who likewise considers himself a charlatan. There’s Jonathan’s partner, Frank, the charming ladies’ man who may—or may not—have slept with Sarah. But most enigmatic and shadowy of all is the suicidal young woman whom Jonathan rescues from the filthy, toxic river that cuts the city in half, and with whom he becomes unwisely involved. But did he really rescue her? Or did she rescue him? Or did it even happen? Such is the powerful, disorienting undercurrent of unexplained coincidences and unanswered questions that threatens to pull Jonathan down, down, down.

Jordan has created something new here: an unsettling but ultimately satisfying blend of the supernatural and noir; a troubling and moving treatise on alienation and love and guilt disguised as a crime novel; a bittersweet, dreamlike journey into “the dead business” that serves as a reminder that we’ll all have to sleep with the fishes one day. I can hardly wait for the film—in black-and-white, of course.