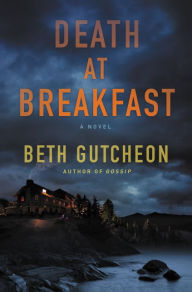 When two women of a certain age decide to attend a weeklong master cooking class at a rustic Maine inn, little do they know that murder is on the menu. While retired school head Maggie Detweiler and her longtime friend Hope Babbin, may not be actual detectives, they are enthusiastic snoopers who pay attention to detail after the charred body of an obnoxious guest is discovered in his bedroom with a poisonous snake for company. It also helps that Hope’s estranged son, Buster, is the town’s deputy sheriff.

Unfortunately, Buster’s investigation is soon taken over by state police who almost immediately determine that the murder was committed by a young woman in her early 20s who had just been fired from her job at the front desk because of a run-in with the wealthy, overbearing deceased. At that point, the real police investigation is basically over, but Maggie and Hope’s search for the truth is just beginning.

This unlikely pair of pseudo-detectives are as likable as they are determined, a quality that not only helps in their questioning of the manager and other guests of the inn, but also endears them to the reader. Together with Buster and other friends, the intrepid duo talk to enough people and uncover enough information about past and present events to turn the state attorney’s case on its head. Although I can sometimes ferret out who the guilty party is in other books, I have to admit I was way off on this one.

The author has written nine previous novels and numerous film scripts, including the Academy Award–nominated The Children of Theatre Street.