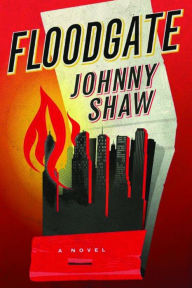 Johnny Shaw has already given us two wonderfully dry, dusty little noir gems set along the open wound of the American-Mexican border. But Floodgate is something else.

Welcome to Auction City, a fictitious Midwest metropolis so corrupt, dangerous, and dysfunctional that even the priests pack iron. It is Gotham City without Batman, a town without pity or hope, the Great Wrong Place, drawn in cynical, extra-bold strokes. Nearly burned to the ground back in 1929 when its various criminal factions (including the cops) finally squared off against each other, the resulting spree of rape, arson, and murder became known locally as “The Flood.”

The plot yo-yos back and forth between the Year of the Flood and 1985, where we meet Andy Destra, a slightly too-honest ex-cop. Since being “shitcanned,” he’s become obsessed with bringing down the odious Police Commissioner Gray, the man behind the trumped-up charges that lead to his dismissal. But the more Andy continues his one-man investigation, the more he becomes convinced there is an even larger conspiracy out there.

Turns out he is right—the truth is revealed to him by Floodgate, a small cabal of five members (representing the church, the mobsters, the gangs, the police, and the citizens), who have kept the lid on Auction for over 50 years, controlling and placating the various factions, hoping to head off another Flood. And they want Andy to join them.

Alas, that initial rush wears thin. One character actually complains that things are “too much like a comic book,” while Andy later confesses it is all a “little too Scooby-Doo for my taste.”

Perhaps that’s why Shaw kicks each chapter off with a brief, clever epigraph—lyrics, news clippings, quotations, interview transcriptions (all fake, of course)—to reassure readers that he is still a serious writer? This is essentially a comic book in prose, more Sin City than Red Harvest. Not that there’s anything wrong with that. But some pictures would be nice.