Books
Woman With a Blue Pencil 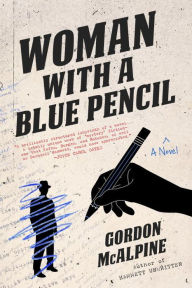 Your first instinct might be to run when you hear all the high-minded praise for this “brilliantly structured labyrinth of a novel—postmodernist in its experimental bravado,” as Joyce Carol Oates calls it.

But relax. Gordon McAlpine doesn’t just write for the tweed jacket crowd—he writes for all of us. He gave us the equally head-spinning Hammett Unwritten a few years ago, and now he’s done it again, proving he’s not just a master of the post-modern, metafictional blues, but also no slouch when it comes to telling a ripping good yarn.

So, sure, your noggin may gyrate a bit, but there’s so much pulpy goodness in this slim, fast-paced volume, even us meat-and-potato readers won’t mind a bit.

Things kick off with an excerpt from “The Revised,” an unpublished novel by one Tukumi Sato. It’s December 6, 1941, and bookish Japanese-American professor Sam Sumida, still reeling from the recent murder of his wife, is sitting in a theater catching the just-released The Maltese Falcon, hoping to pick up a few pointers from Bogie. Seems the LAPD doesn’t give a damn about nailing his wife’s killer, so Sam figures he may have to do it himself.

It’s a promising start, hinting of a great period piece noir to come, full of nuance and melancholy. And then things get weird. The film breaks and the narrative is interrupted by a rejection letter from Maxine Wakefield, an editor at Metropolitan Modern Mysteries, Inc., suggesting that “in light of last Sunday’s tragic events” the publication of the book is “impossible.” She tosses Sato a bone, though, suggesting that maybe—with major revisions—the book might still be salvaged.

That’s followed by another excerpt, this time from another book entirely. It’s from The Orchid and the Secret Agent, by one William Thorne, and it’s all rah-rah red, white, and blue patriotism and testosterone, as Korean-American private eye turned super-duper secret agent Jimmy Park wages war against “those dirty Japs” in post-Pearl Harbor America. It’s so over-boiled and over-blown it’s laughable; a prime piece of race-baiting, wartime cheese.

Which is followed by another excerpt from Sam, sitting in that darkened theater, waiting for the show to start up again, unaware his world is about to slip into an alternate reality worthy of a Philip K. Dick novel.

Which, in turn, is followed by another missive from Maxine, who thanks Sato for all his hard work on the now-retitled book he’s writing under the more American-sounding pen name of Thorne.

But Sam is still alive and well, somewhere out there in literary limbo, thrust into a book and a world he no longer understands. The rest of Woman With a Blue Pencil jumps from narrative to narrative, and from letter to letter, the distinctions starting to blur as one reality bleeds into another and the novels begin to overlap with reality, particularly when the author himself is placed in an internment camp.

Woman With a Blue Pencil could be a pompous, pretentious mess, but McAlpine is a master of style and tone, jumping from piece to piece, building up an evocative, highly readable, and timely literary tour de force that confronts historic events with audacity and true grit. It’s a literary jigsaw puzzle that entertains even as it raises hard questions about racial and cultural identity, paranoia and repression—tough topics that are all too often blue-penciled to make the past taste better. Or the present.