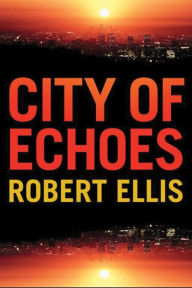 I’ve long been a fan of Robert Ellis’ work, books that are close cousins to Michael Connelly’s Harry Bosch series. Set in LA, they are straightforward police novels—on the surface—just as Connolly’s are. While several of his novels feature the female LAPD detective Lena Gamble, this book focuses on Matt Jones, a new-to-homicide detective who is assigned to investigate the death of his former partner as his first murder case.

Matt and his new partner Denny Cabrera get a call from the dead cop’s partner, who seems strung out and worried. He tells them that there are some closed murder cases of young women that are not really solved. Moreover, he thinks they are the reasons his partner is dead. Cabrera thinks the man is not to be trusted, but Jones is not so sure, and studies the case notes of the crimes in question.

In this way, Jones becomes the quintessential loner, the detective working on his own against the establishment. He’s not a white knight, though—his character has some moral ambiguity and often behaves badly. A true white knight holds firm to what is right and trusts the right people; Matt, not so much. It is to Ellis’ credit that he takes readers deep inside Jones’ mind and behavior, so that when he acts out, readers understand why he’s doing it. In fact, I was so totally with him, I did not even see ahead to the consequences of Jones’ actions. That’s pretty close identification with a character, and only really good writers can make you feel so strongly about one.

Ellis is a wonderful storyteller and draws the reader into the investigations of the dead young women. It becomes clear that the killer is still active when more women are discovered.

As the threads of the cases began to draw together with a sizable chunk of the novel left to go, I wondered where Ellis was going with his story. The denouement is powerful, heartbreaking, and explicates Matt’s decisions and character, all at the same time. City of Echoes is another bravura effort from the talented Robert Ellis.