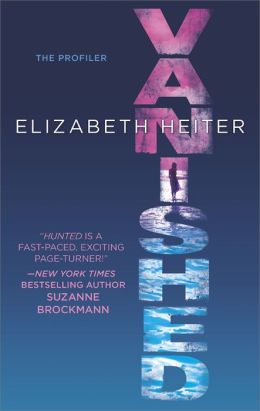 Elizabeth Heiter’s Vanished features Evelyn Baine, an FBI profiler who is haunted by the kidnapping and presumed murder of a childhood friend 18 years ago at the hands of the man known as the Nursery Rhyme killer. She also suffers from survivor’s guilt, after a recent revelation that she was also apparently targeted by the madman. Thus, when the killer resurfaces in her old hometown, she hastily volunteers to work the case. Little does she know that her investigation will be hindered by hostile locals, numerous suspects, and a killer with a kill-or-be-killed attitude.

Vanished is a dark and moody book; the despair is almost palpable. It’s ultimately uplifting, however, to vicariously experience Evelyn’s search for the truth. Her battle is hard fought, and vividly described through Heiter’s well-wrought, workmanlike prose. Each character is distinct and well rendered, and the plotting is admirable. A handsomely crafted mixture of police procedural and thriller, Vanished is a book whose events will haunt you well after you finish.