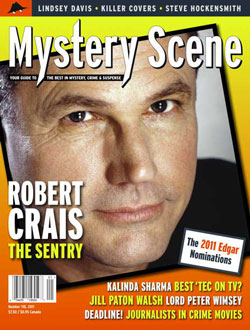 With Elvis Cole, Joe Pike, and a large cast of continuing characters, Crais has created a world—and a new way to tell us about it.
by Kevin Burton Smith

Walsh continues the adventures of Dorothy L. Sayers’ Lord Peter Wimsey, this time in a 1952 murder investigation that has its roots in Wimsey’s very first case 30 years before.
by Lynn Kaczmarek

Like detectives, journalists are often involved in ferreting out the truth and exposing wrong-doers—sometimes with cataclysmic results, as in the Watergate scandal.
by Art Taylor

The Murders in Memory Lane: Evan Hunter, Part I

Over his 60-year career, Hunter (aka Ed McBain) turned out an extraordinary volume of work, and never lost his enthusiasm for it.
by Lawrence Block

There’s only one thing these folks like more than books...
by Stephen J. Gertz

Steve Hockensmith: Holmes on the Range

These book jackets do justice to the excellent stories they promote.
by J. Kingston Pierce

Moments of Weakness
by Simon Wood 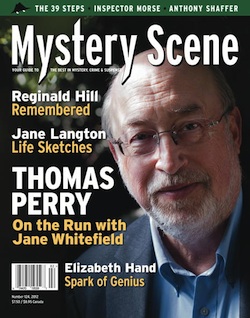 The author of The 39 Steps and the father of the modern spy thriller.
by Michael Mallory

We read PI fiction as much for the voices as the stories they tell.
by Kevin Burton Smith

The much-admired novelist was a dominant figure in British crime writing of the last half century.
by Martin Edwards

Where the Ripped Edges Peel Away

An interview with Elizabeth Hand, author of Available Dark and Generation Loss.
by Paul Doiron

The celebrated author of Sleuth had a long and varied career criminal career.
by Joseph Goodrich

Mary Astor in Act of Violence, Margaret Millar’s How Like an Angel, Hitch gets kinky in Frenzy
by Ed Gorman

Mayhem in the Hamptons
by Elizabeth Zelvin