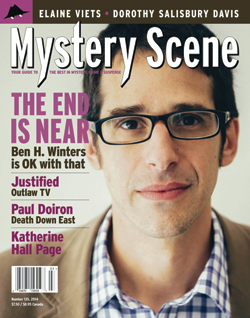 A look at the historical mystery writer who put Dr. Sam Johnson on the case in witty short stories.
by Michael Mallory

It’s six months before an asteroid destroys Earth and detective Hank Palace continues his lone crusade to bring order to the apocalypse in the final book of this highly praised trilogy.
by KOline H. Cogdill

Paul Doiron: A Light in the Forest

This Elmore Leonard-inspired show has always had big ambitions —and the payoff is on the way.
by Jake Hinkson

A star in the 1950s to ’70s, Davis had a rich understanding of the human condition.
by Sarah Weinman